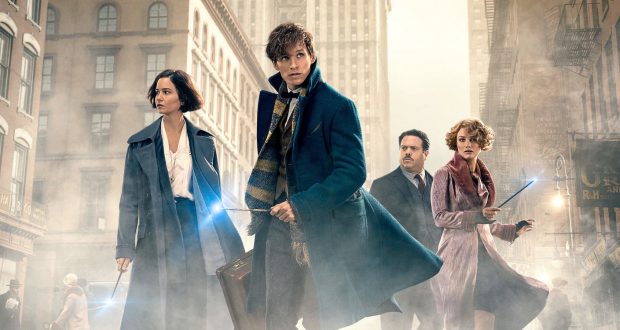 FANTASTIC FOUR: From left – Katherine Waterston, Eddie Redmayne, Dan Fogler and Alison Sudol in Fantastic Beasts and Where to Find Them.

Film review: Fantastic Beasts and Where To Find Them 3D (12A)

For many cinema-goers, returning to JK Rowling’s wizarding world is probably the highlight of the 2016 calendar.

With that kind of hype behind Fantastic Beasts and Where To Find Them, it felt to me like finding critical acclaim was an almost impossible task for four-time Harry Potter director David Yates and the cast.

As somebody that didn’t read the books, I enjoyed the Potter films for what they were – escapism and care-free entertainment.

And as far as I’m concerned, the first slice of the expected five Fantastic Beats films hit the same sweet spot.

Laden with Potter easter eggs, fine action and hugely impressive CGI, it’s certainly a blast to watch at the cinema.

Taking the lead this time is Eddie Redmayne’s Newt Scamander. He’s a very awkward “magizoologist” who has a host of escaped creatures living inside his magical briefcase (which puts Hermione’s handbag to shame).

But things take a turn for the worse when he runs into former auror/wizard cop Tina Goldstein (Katherine Waterston) and muggle (or nomaj as the American’s call us humans) Jacob Kowalski (Dan Fogler). The three, along with Tina’s mind-reading sister Queenie Goldstein (Alison Sudol), are essentially our new Harry, Hermione and Ron.

Newt’s trip to New York coincides with some unexplained events in the Big Apple, which the American magical authority – known as the MACUSA – are investigating.

With a few of Newt’s fantastic beasts managing to escape, he’s very much on their radar as chief suspect.

It must be said that mixing magic and child abuse is an odd combination here, but the two plots do have pleasing pay-offs.

Although I found Fantastic Beasts to be not quite as charming as the Potter films, it certainly has its moments.

Redmayne’s Newt is a great new lead character, with his briefcase and the scenes inside it among my favourite moments.

As the first film in another long-running series, there was obviously going to be groundwork done to introduce the new faces.

While the new foursome of Newt, Tina, Jacob and Queenie are explored well, fans of the Potter films may not take to them as well as the original group.

The beasts are the highlight and serve as the comic relief, but the story does suffer a little in the subplot involving Farrell (through no fault of the actor).

The magical MACUSA base was another strong point, with the visuals genuinely stunning in 3D.

There’s potential here for a great series of films – and this is certainly a solid start.

Voice Verdict: 8/10 (reviewed at Boston’s West End Cinema)
+ Eddie Redmayne
+ Incredible visuals
+ Great to be back in JK Rowling’s magical world
– Not quite as charming as Potter