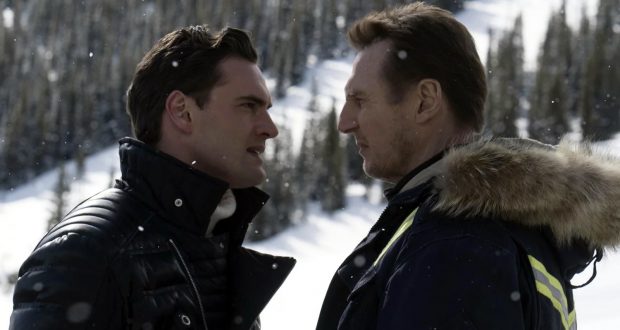 His recent behaviour aside, Liam Neeson has always been a safe pair of hands when it comes to delivering a certain kind of performance.

Ever since 2008’s Taken, Neeson has been the go-to man when it comes to being the ‘vengeful older guy’ – so much so that I can’t remember the last time he didn’t play that kind of character.

Cold Pursuit casts Neeson in a similar kind of role, but there is plenty here from director Hans Petter Moland to make it stand out from the very busy crowd.

Once again, Neeson hunts down bad guys and finds inventive ways to take them down. You may feel you’ve heard it all before, but Cold Pursuit attempts to channel that Fargo style of dark humour, with mixed results.

Anyway, we follow the story of Nels Coxman (Neeson), a model citizen who drives a snowplow in a Colorado ski resort town.

His life gets turned upside down when his son gets unwittingly caught up in the area’s drug scene and is killed by a vengeful dealer.

It’s here that the film starts to feel like Taken, as Coxman methodically hunts down the men involved and does all he can to find the true person responsible for the death of his only child.

It’s both funny and enjoyable to watch his plan unfold, but Cold Pursuit soon takes an impressive twist by benching that killing spree in favour of a wider story.

That’s when we’re introduced to the larger gang war between flash city gangster Viking (Tom Bateman) and the local Ute tribe, who are led by White Bull (Tom Jackson).

There are too many other supporting characters to mention here, but each of them have a funny nickname and they all get a Hunger Games style send-off when their time comes.

There’s also a side plot that features cops Kim Dash (Emmy Rossum) and John ‘Gip’ Gipsky (John Doman), who have conflicting views on how ‘exciting’ the fully-fledged drug war is.

Throw in a disappointingly small turn from Laura Dern as Coxman’s wife Grace and there’s plenty of meat on the bones here.

It’s an enjoyable watch overall, especially with Nels’ revenge plan spiralling out of control in ways you won’t expect.

If you’re hungry for action, however, you may be disappointed that Cold Pursuit does drop its frantic pace at the half-way point.

Seeing Neeson up to his old tricks is a joy to behold early on, but the dark humour that follows is also a welcome addition to proceedings.

Don’t get me wrong, I wasn’t gripped in a Taken kind of way, but it was nice to see a different spin on the genre.

It’s more of an interesting watch that will keep you guessing until the final exchanges, while also serving up some laughs that are sometimes wholly inappropriate.

A solid action thriller, there’s enough here to keep you interested throughout.