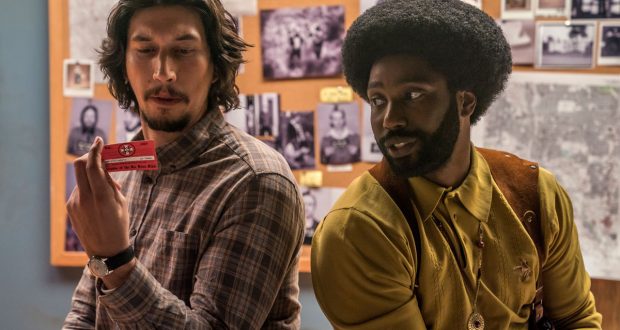 With BlacKkKlansman, veteran American director Spike Lee (Malcolm X, Do The Right Thing) brings the historic story to the screen and holds up a mirror to modern society.

In late-1970s America, Ron Stallworth (John David Washington, Ballers) is the first black detective in the Colorado Springs Police Department. His dedication to the force shines and he quickly rises to the rank of detective. His first undercover assignment is attending a talk by revolutionary speaker Kwame Ture (Corey Hawkins) preaching Black Power at a college campus.

To her, racist actions of some police officers make all police the enemy, while Stallworth is trying to change things from the inside, balancing the very real black struggle and his duties as part of the system.

This duality is forced into overdrive when he calls a newspaper ad recruiting Ku Klux Klan members.

He’s convincing enough to get access but for obvious reasons can’t attend, so a plan is hatched. Colleague Flip Zimmerman (Adam Driver, Star Wars), a Jewish detective, is called in to be the face of Ron. They get their story of the collective Stallworth together and Flip faces his first trials.

Swaying, dim and barely ever out of a drunken stupor, Ivanhoe (Paul Walter Hauser) has fallen sideways into the Klan, and barks out slogans and slurs in contribution.

More dangerous, however, is the seething, paranoid and all too intense Felix (Jasper Pääkkönen, Vikings). On their way to meet the Ku Klux Klan Grand Wizard David Duke, it’s the bloodthirsty Felix (and his at first seemingly sweet but racist bile-spitting wife) who stands in their way.

There aren’t any easy answers in BlacKkKlansman: the characters are split between their races, their duties and their friends. Similarly, the film is split between detective drama and comedy. The only clear cut thing on display is the devastating result of hate.

BlacKkKlansman is a comedy-thriller throughout, balancing both aspects masterfully. But you won’t leave the film laughing – the state of real-life race relations in America is brought to the fore and the by the end it is a horror film.

Released in the US on the first anniversary of the fatal Charlottesville white supremacist rally, what happens in the story is positively light relief when, by way of a coda,

Lee brings the film up to the present day with footage of the 2017 rally in which a car ploughed into anti-fascist protesters and the real-life David Duke addressed a strong following.

Co-produced by Jordan Peele, whose Oscar-winning Get Out was a searing satire on American race relations, BlacKkKlansman fits the same box: top-drawer entertainment and a stark, chilling reflection of the times.