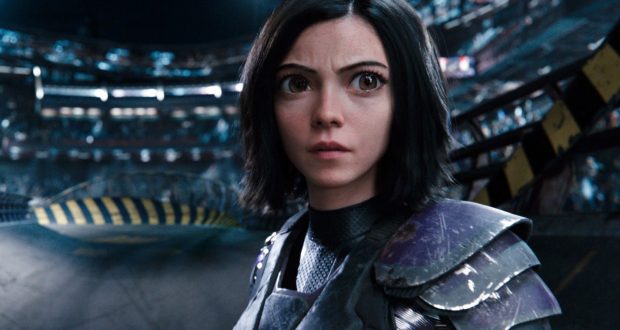 WELCOME TO MY WORLD: An on-form Rosa Salazar is unrecognisable as Alita in the excellent Battle Angel.

As a fan of the science-fiction genre, the all-star team-up between Robert Rodriguez (director) and James Cameron (writer) for Alita: Battle Angel isn’t far off as good as it gets (hype-wise).

With those two working on the iconic manga story of Alita, this is a film that many have been looking forward to for some time.

There’s an abundance of incredible source material for the pair to work with here and, for my money, they’ve managed some pretty remarkable world building.

If you love futuristic sci-fi films or video games of a similar ilk, Alita: Battle Angel may be the best offering of its kind since Blade Runner 2049.

Set in a very distant dystopian future, this is a world that is trying to get itself back on its feet in the aftermath of an event dubbed “The Fall” – a war that left only a small part of the globe habitable.

In the junkyard slums of Iron City (which lays beneath the wealthy sky city of Zalem) our window to this world opens with Dr Dyson Ido (Christoph Waltz) discovering a disembodied female cyborg with a fully intact human brain. He rebuilds her and gives the teenage girl the name Alita.

Unbeknown to him, Alita (an unrecognisable Rosa Salazar) is an extremely advanced cyborg who is suffering from memory loss.

She sees the world with wide-eyed wonder and soon befriends street-wise Hugo (James Keenan), who shows her the ropes (and introduces her to chocolate, of course).

With every step she takes, Alita begins to remember more about her origins – and it soon becomes clear that she’s an expert in a long-lost cyborg martial art.

Ido acts as her father figure and bids to keep her out of trouble, but Alita is naturally drawn towards it.

Over the course of the film, she goes through enough to cover an entire trilogy of films, with the story using material from the first four volumes of the manga Battle Angel Alita.

She dabbles in the dangerous “Motorball” races, confronts killers and bounty hunters, manages to fall in love and does her utmost to take down the bad guys throughout the 2.22hrs running time – and I loved almost every second of it.

Be it the amazing visuals or the creativity shown to create the enhanced civilians who live in the city, it’s breathtaking stuff. The action is relentless, too.

This is one of those films that I didn’t want to end, with Salazar’s amazing performance as Alita one that is sure to get all viewers on-board with her journey.

There’s lots of material here for a series of films, with a sequel expertly set-up.

Perhaps Alita spins too many plates at once and dilutes its message somewhat.

But I’m already excited for what comes next.