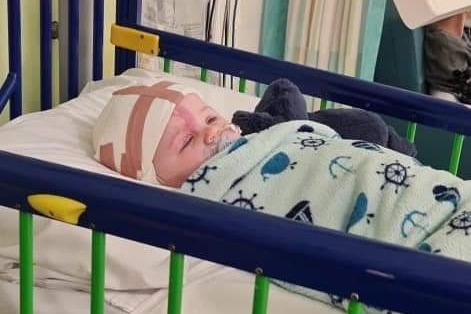 A family have thanked the community for their support after an eight-month-old underwent an 11-hour operation to disconnect half of his brain.

Oscar Wright underwent the rare operation to combat some of the symptoms of Sturge Weber Syndrome last Thursday and is slowly recovering.

His Crowland family including mum Bethanie Rollings and dad Tim Wright have described the operation at London’s Great Ormond Street Hospital as his “only hope” after the condition brought on severe epilepsy.

Oscar’s nanna Gemma Niemiro said: “We won’t know if it’s a success yet; only time will tell.

“But they are all happy with how well he coped with the surgery and we are all now just wanting him home so we can help him with his recovery and so he can be around his family.”

Oscar is now slowly recovering and on morphine to help with the pain as well as suffering with a swollen eye.

But there’s plenty of signs of encouragement thought and he’s waving his left arm and leg around which due to the syndrome was much weaker than his right and the family had been told it could be left paralysed by the operation.

Due to COVID-19 restrictions, only dad Tim is allowed to stay with Oscar while Bethanie is at home.

Gemma said: “We are not allowed in to see Oscar and haven’t since the day he went into surgery so it’s been a long few days.

“We figured by being home keeping busy and being able to go down if needed was better for us mentally rather than be sat in a city we don’t know.

“It’s been extremely hard for us all and we are missing them like mad.

“We cannot wait to see them.”

“COVID has made this already stressful time so much harder – I don’t think people understand the impact, people are now going about their day not realising that in hospitals up and down the country there are families just like ours having to go through this on their own and who are not allowed by our loved one’s bedside.”

Gemma is fundraising for the family to help pay for hotel bills for while Oscar is in hospital. You can donate here.

She said: “Thank you to all that have donated and offered support

“Now this is where it gets hard – we don’t know how long he will be there and because of the COVID restriction his mummy is not allowed in to see him which is heartbreaking – and doubly hard because of the one thing she needs she can’t have – her son.

“I, as Oscar’s nan, have never been prouder of them all – and I will do everything in my power to continue to raise money for them so they don’t have to worry. Thank you all from the bottom of my heart.”