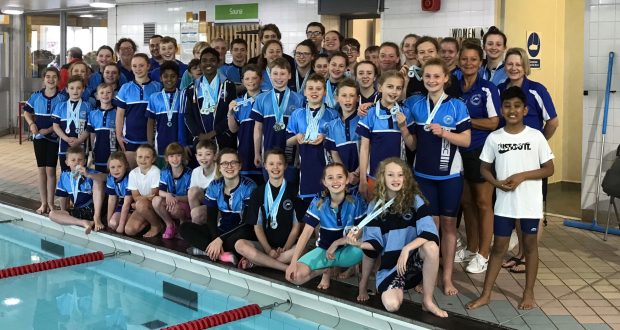 WHAT A WEEKEND! South Lincs swimmers are pictured at the 35th annual Tulip Meet.

The event, which was sponsored generously by Superflora who provided the club with floral bouquets to award to the top swimmers in each age group along with trophies, saw swimmers from across the club participating – from those coming to the end of their learn to swim programme, right up to a number of national qualifying hopefuls.

There were many excellent performances, but the weekend really belonged to the swimmers in the Spalding-based club’s Development squad, who showed excellent progression in their competition performances.

He was highlighted at the club’s awards evening as the most improved swimmer for 2018 and showed further progress here.

In the 200m Individual Medley (IM), Will lowered his PB by an astonishing 37 seconds to swim under the four minute mark for the first time and stop the clock in 3.49.97mins.

There was also a significant reduction in his 200m breaststroke of more than 16 seconds to post a new PB of 4.34.17mins.

However, Vere’s most improved race came in his preferred backstroke swim.

In the 200m distance he shattered his PB by more than 48 seconds to claim a podium finish and take the bronze medal in a time of 3.25.62mins. He also followed this up with a second bronze medal in the shorter 100m backstroke.

Meanwhile, Anish Suwarneraj managed to post new PB times in all of his six races contested over the weekend. He also swam to podium finishes in the boys’ 11 years age group, claiming silver in both the 50m backstroke and the 200m backstroke with new best times of 42.21secs and 3.15.52mins respectively.

Showing great versatility, she claimed a silver medal in the 50m freestyle with a three-second PB time of 35.86secs and swam to an excellent gold medal in the 200m IM (3.15.82mins).

His biggest improvements came in the 200m IM with a ten-second PB, posting a time of 3.27.82mins.

Erin Siggee showed her capabilities in the breaststroke events in the girls’ ten years age group.

She swept to gold in the longer distance 200m breaststroke with a three-second PB time of 3.36.19mins.

Lucie Lund then made it a hat-trick of medals in the girls’ 11 years age group.

Setting new PB times in all of her events, she took bronze in the 50m fly in a time of 35.80secs.

Lund went on to take silver in her preferred 50m backstroke with a time of 37.19secs and finally lowered her 100m backstroke time by more than four seconds to post a new PB of 1.20.53mins and claim the gold medal.

Elsewhere, Frank Lamb dominated the boys’ nine years age group – claiming 11 gold medals from 13 swims over the course of the weekend. His highlight of the weekend was a big drop in his 200m backstroke event, which saw Lamb lower his best time by more than eight seconds to post 2.58.93mins – his first time under the three minute mark.

Also impressing was Nathan Hyden, who set a long list of new PB times and was able to claim a number of podium finishes.

Hyden took silver in the boys’ ten years age group 100m freestyle with a time of 1.28.85mins – one of the few events in which he did not better his PB.

However, his bronze medals in the 50m butterfly and the 50m breaststroke were all achieved in new PB times and he touched the wall in 50.98secs and 52.05secs respectively.

Aidan Evans was on medal winning form in the boys’ nine years age group too, as he swam to nine medals over the course of the weekend.

Some of the highlights of his campaign included a 13 second improvement in his 200m freestyle, where he took a bronze medal.

In the 100m butterfly Evans lowered his PB time by more than 17 seconds to claim the silver medal in a best time of 2.03.44mins.

However, his biggest improvement came in the 200m breaststroke where he lowered his PB by almost 24 seconds to swim under the four minute mark for the first time and stop the clock in 3.52.39mins for another bronze medal.

Lilli Bowman saw improvements across a range of events in the girls’ 12 years age group. She set new PB times in the 200m freestyle, where she lowered her best time by three seconds to post 2.54.47mins.

There were also good improvements in her 50m and 100m backstroke where Bowman set new standards of 42.61secs and 1.33.37mins respectively.

It was also Bowman’s first time swimming the 200m IM where a strong performance gave hera best time of 3.29.03mins.

Dziugas Baziliauskas also set significant new PB times over the course of the meet and was rewarded with a collection of six medals.

Baziliauskas made a major drop in his 200m breaststroke lowering his best time by 15 seconds to set a new best time of 3.46.37mins to take the bronze medal in the boys’ 13 years age group.

The weekend of performances was capped off by eight of the club’s swimmers winning top boy or top girl in their age groups.

Brother and sister Edward and Esther Skells also won top boy and girl in the 15 years and over age group.