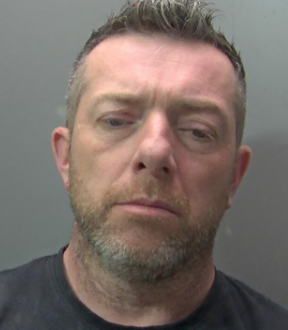 Scott Walker, who has been jailed for life for the murder of his 17-year-old daughter Bernadette.

Dad jailed for life for murder of daughter (17)

A man who murdered his daughter and then hid her body after she made allegations of sexual abuse against him has been told he will serve a minimum of 32 years in prison.

Today (Friday) Scott Walker was sentenced to life in prison after being found guilty of killing 17-year-old Bernadette Walker at Cambridge Crown Court earlier this year, despite her body never being found.

It is still not known how Bernadette, known as Bea, met her fate but the last confirmed sighting of her alive was when Scott picked her up from his parents’ home in Werrington, Peterborough, on Saturday, July 18 last year.

She had been there as a result of the allegations she’d made the previous day against the person she knew as “dad” but was not her biological father.

However, Scott did not take the teenager back to their home in Century Square, Millfield, that morning.

His mobile phone activated cell sites in the Dogsthorpe and Gunthorpe areas, both in the opposite direction, and at just before 11.30am it disconnected from the network and didn’t reconnect for an hour-and-a-half.

For the following seven weeks, Scott and his former partner, Bernadette’s mother Sarah, deceived friends, family and police by laying a false trail to suggest Bea was still alive and had run away from home.

On July 26, Scott was found guilty of murder and two counts of perverting the course of justice, relating to providing false information to police and sending messages from Bernadette’s phone.

Sarah Walker had previously admitted perverting the course of justice by sending messages from Bea’s phone and providing false information to police (without knowing Bea was dead and with the intention to cover up the sexual allegations against Scott). However, she was found guilty of alternative charges of perverting the course of justice, which were identical to the charges she admitted but with the knowledge that Bea was dead.

Today (Friday), they both appeared at Cambridge Crown Court where Scott was sentenced to life in prison with a minimum term of 32 years.

The prosecution barrister told the court there were three major aggravating features – the premeditation of how Scott planned the murder, the gross breach of trust, and Scott refusing to tell police where the body was.

Detectives have visited Scott in prison since his conviction in order to try to speak with him, however he has refused up to now.

Sarah was sentenced to a total of six years in prison, of which she must serve at least half before being considered for parole.

Detective Inspector Justine Jenkins, from the Beds, Cambs and Herts Major Crime Unit, said: “I would like to thank our prosecution team who presented our case exceptionally well, enabling us to get justice for Bea after what has been such tragic circumstances. I still hope we may get the answers we need to be able to find her and lay her to rest. If anyone has any information about this investigation which may help us find Bea, please get in touch.

“We may never know the truth about what Scott did and why, but we do know Bea had made allegations of abuse against him.

“My plea to anyone who may have been subjected to abuse is to speak to us. Bea thought she could confide in her own mother, who should have been able to protect her, but instead she met a tragic end.”

During the six-week trial earlier this year, the jury heard Bea’s mother had not reported her missing to police until July 21.

Scott claimed he had stopped the car on their way back from his parents’ home to speak about the allegations Bernadette had made, but she had got out and ran off in Skaters Way, leaving her rucksack behind.

However, police discovered that instead of going straight to collect her that morning, Scott had gone to a lock-up garage owned by his parents in Walton. And it was not the only time he visited this location in the days after Bea was reported missing.

Having disconnected from the network for an hour-and-a-half after Scott picked Bea up, once it reconnected the first call he made was to Sarah, lasting nine minutes.

In the following 48 hours, both Scott and Sarah made multiple trips to the lock-up as well as to Cowbit, in the dead of night.

Passwords on Bea’s social media accounts were changed and messages sent to friends and family to make it look as though Bea had simply run away from home.

The allegations Bea had made about being sexually abused by her father were passed to police via a social worker on July 22.

On September 10, Scott was arrested for this and allegedly coercively controlling Sarah. The following day, the investigation became a murder enquiry.

Bea’s rucksack was found in the Walton lock-up and a diary found inside. An extract read: “Told my mum about my dad and the abuse. She called me a liar and threatened to kill me if I told the police. What kind of parent wouldn’t believe their daughter?”

Meanwhile, extensive searches by specially trained officers continued for many weeks including several searches of the Cowbit area, but Bea’s whereabouts remain unknown to this day.

DI Jenkins said: “We know Bea was without her mobile phone when she left the family home on July 17.

“Despite this, a number of messages via text and social media were sent from Bea’s phone, by both Scott and Sarah, to make it look as though she was still alive and not wanting to go home. This would then explain their failure to report her missing for several days.

“After three days of Bea having been ‘missing’, Sarah contacted us via webchat to ask for advice and eventually called 101 to make a formal missing person report. It was clear nothing had been done to make sure Bea was safe, just a very long line of lies and deceit which grew by the day.”