The Conservative group on South Holland District Council has increased its control by gaining extra seats.

It now has 28 councillors – up three on the position before last week’s election.
The Tories begin their fifth term as the ruling group with nine new faces. 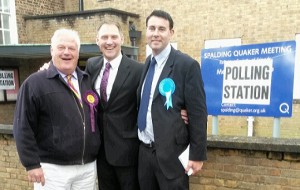 Getting together at a polling station in Westlode Street, Spalding, are (from left) Pete Williams – who became the first UKIP member elected to South Holland District Council – and Spalding Castle candidates Mark Le Sage (Independent) and Gary Taylor (Conservative), who retained the seat.

Coun Newton said: “I had said to some of the other Independent candidates that, because the General Election was the same day as local elections, they should expect the Conservative candidates to do well.
“John Hayes is held in high regard by a large majority of the community, even if they are not Conservatives, and when voting for him, people would go on and vote for Conservative local candidates.
“I am really sorry to have lost four hardworking Independent candidates who, I am sure, would have been returned had it not have been General Election day.
“I have contacted [council leader] Coun Porter to congratulate him and say I am pleased to see that there will be several younger people joining the council.”

At 20 years old, Coun McLean is the youngest-ever member to serve on South Holland District Council.
For Coun Astill it is a second time as Conservative member in Crowland and Deeping St Nicholas – and he is already close to having a longer tenure than the previous one.
In 2007, he was on the council for just a fortnight before resigning when it emerged that not all ballot papers had been counted.
Coun Astill has returned to the Conservative fold after standing unsuccessfully as an Independent in 2010.

Coun Gary Porter was hoping for 27 or 28 seats, adding: “I’m pleased that we have got some really good councillors, but sad that we’ve lost some too.
“I’m also pleased that there is still a strong opposition – I think that’s important.
“I would’ve liked to have seen more Labour and LibDem candidates. It isn’t right that people who want to vote that way don’t have that choice and I hope that’s rectified next time.”