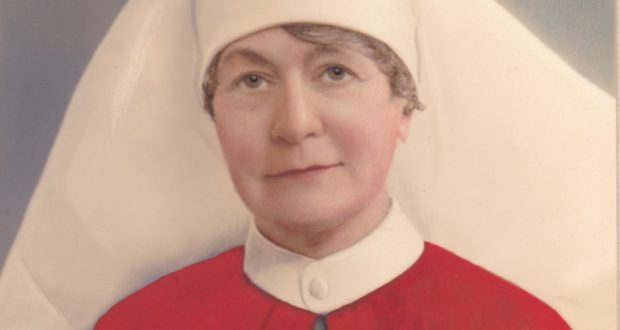 Matron Casswell on the cover of the May 1939 issue of Nursing Illustrated.

Casswell is a well-known South Holland surname and this week’s Spalding Gentleman’s Society celebrates Margaret ‘Madge’ Casswell who had the rare, if not unique, distinction of commendations from both Adolf Hitler and Winston Churchill.

Margaret was born in Gosberton in 1884 and served as a nurse during the First World War and worked in a military hospital in Gibraltar, where, in 1937, the German ship Deutschland was hit by Republican bombers during the Spanish Civil War, resulting in 55 badly wounded servicemen.

For humanitarian reasons it was agreed the British would offer medical assistance despite already being under strain tending to the Royal Navy ship, Hunter. 50 Germans were saved and Matron Casswell was awarded The Ladies Cross of the German Order of the Red Cross, the highest German honour for medical staff, with a certificate from Hitler.

The Spalding Gentlemen’s Society holds Madge’s medals and miniatures. The archive also holds the correspondence with Buckingham Palace and some family photographs; mentions in Despatch Certificates with printed signatures of Winston Churchill, copies of her medal cards, and the German Red Cross Certificate with the printed signature of Adolf Hitler.

They will be on display at the Open Day on Sunday, January 20, alongside further details of Margaret and her sister, Theo. Free entry, 2pm-4pm, at Broad Street.