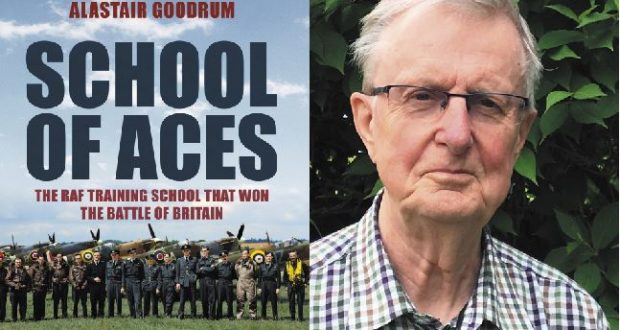 A new book that reveals a key part RAF Sutton Bridge played in winning The Battle of Britain launches next week.

Spalding man Alastair Goodrum will launch his book School of Aces with a signing event and talk at Bookmark on June 20 at 7pm.

He said: “During the 1970s, I went on several crashed aircraft recovery ‘digs’ with local aircraft preservation groups.

“Some of these digs recovered bits from aircraft that had operated from RAF Sutton Bridge.

“My interest in the station, its aircraft and the men that flew them, arose out of this.”

He said in researching the station, he has been able to write five books and more than 100 articles. He also held a commission in the training branch of the RAF Volunteer Reserve and was an office commanding 2430 (Holbeach) Squadron of the Air Training Corps.

During his time researching the book, Mr Goodrum came across some surprises about RAF Sutton Bridge.

“I did not expect to find that so many trainee pilots, from so many nations, at Sutton Bridge went on to fight in the Battle of France and the Battle of Britain.

“Of the 525 pilots taught to fly the Hawker Hurricane while at Sutton Bridge between April and October 1940, 390 actually fought in the Battle of Britain.

“I also did not expect to find a story about the man who actually flew UNDER Cross Keys bridge in 1930!

“All these stories and much more, are in the book.”

The book is being released by Amberley Publishing and will be available to buy in shops and online from Saturday, June 15.