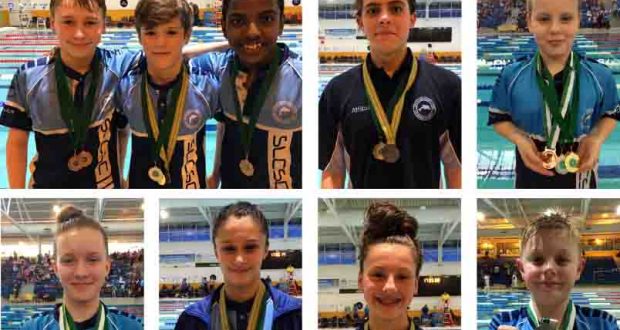 FAIR TO MEDALLING: A selection of South Lincs’ medal winners proudly display their spoils from the weekend.

South Lincs Competitive Swimming Club enjoyed a weekend to savour as they claimed 44 medals at the second round of the Lincolnshire County Championships.

An impressive 12 of them were gold medals, while 13 silvers and 19 bronzes also came home to the Spalding-based club, whose members also clocked numerous personal bests (PB) and met regional qualifying standards.

Alex Sadler had a busy weekend, competing in seven events and achieving medals in six of those in the boys’ 13 years age group.

His hard work in training over the last few months paid off as he made it a hat-trick of gold medals making the top of the podium in the 200m and 400m freestyle in new PB times of 2.14.30mins and 4.36.86mins respectively.

Sadler’s third gold came in the 100m butterfly, where he broke the 70-second barrier for the first time to finish in 1.09.57mins.

For good measure, he also collected two silver medals in the 400m and 100m Individual Medley (IM) and bronze in the 50m backstroke.

Atticus Strickland was also a double gold medallist in the boys’ 16 years and over age group. He swam strongly in the 400m freestyle to set a new PB time by five seconds (4.18.76mins).

Strickland followed this up with an excellent 400m IM where he also set a new PB of 4.49.50mins.

In addition to his age group medals, he also took silver in both events in the men’s senior championship.

In the youngest age group, the 10/11 years, it was Frank Lamb who produced some outstanding performances.

Not to be outdone the girls had strong performances as well. Emma Croker produced an outstanding 200m freestyle swim, staying with the lead swimmers throughout the opening 150m, it seemed the gap was too great to close.

But a final tremendous push saw her move from third to first to take the gold medal in the girls’ 15 years age group with a superb PB of 2.05.96mins.

This was also the fastest time posted in the event and gave Croker the ladies’ senior championship trophy.

She followed up this performance with another gold medal win in the 50m backstroke and collected the silver in the 100m butterfly.

Ellisha Cookson was also on fine form as she claimed gold medals in the 400m IM and the 200m breaststroke in both her age group (girls’ 16 years and over) and the ladies’ senior championship.

In both events, Cookson took an early lead in the race and was never challenged.

She also added two silver medals to her personal haul in the 16 years and over age group in the 200m freestyle and the 100m IM.

Mollie Briggs, who had such a brilliant start to the championships, continued her winning streak by taking the gold medal in the girls’ 15 years age group 400m freestyle. She touched home in a time of 4.32.96mins that saw her also take the silver medal in the ladies’ senior championship.

While favouring the longer distances, Briggs also showed her talents in the middle distance events as she added bronze in the 200m freestyle in her age group with a PB of 2.10.65mins.

Oliver Sorrell, who is in great competition form at the right time in the boys’ 13 years age group, collected five medals over the course of the weekend.

He struck silver in the 200m breaststroke with a big new PB time of 3.06.34mins, lowering his previous mark by six seconds.

He also added four bronze medals to his growing collection with third place finishes in the 200m and 400m freestyle events along with the 100m and 400m IM events, all in new personal best times.

Beatrice Finch has been developing as an all-round swimmer with four strong strokes and this was reflected in her results over the weekend, most notably in the IM events.

In the 400m IM she produced an excellent swim to set a new PB time of 5.22.14mins to take the silver medal in the girls’ 14 years age group.

That also saw Finch collect the bronze medal in the girls’ junior championship.

Not done there, she added bronze medals in the 100m IM and 200m freestyle.

Isobel Gosling has shown excellent progression in her freestyle swimming and was once again on the podium in both 400m and 200m freestyle events.

Meanwhile, Nitesh Anbazhagan was another on medal-winning form.

He took silver in the boys’ 14 years age group in the 200m breaststroke event, improving his PB to 2.51.10mins in the process. This time was enough to secure the silver medal in the boys’ junior championship.

Luke Blanchard was another on form with his breaststroke swimming as he finished in a new PB time of 2.33.02mins to take the silver in both the boys’ 16 years and over age group and in the men’s senior championship.

Blanchard also added a bronze medal from the 400m freestyle to his growing collection.

Aidan Evans was competing in the boys’ 10/11 years age group and swam in a number of events before he managed to secure himself a medal.

His performance in the 50m backstroke saw him in the lead at the half way mark of the race, however he couldn’t hold on in the final five metres and was touched out and had to settle for silver in a new PB of 38.32 secs.

Aurinija Maliauskaite was a double bronze medallist over the course of the weekend.

Competing in the girls’ 16 years and over age group, she took third place in the 400m IM with a new PB time of 5.13.02mins and then took her second medal in the final of the 100m butterfly.

Joe Lund was also a double bronze medallist. He produced some outstanding swims over the course of the weekend and was rewarded with a podium finish in the 400m IM, where he set a new PB of 4.57.06mins.

In his favoured breaststroke event, Lund produced an exceptional swim in the 200m distance to lower his PB time by four seconds to finish in 2.34.91mins.

This was enough to take bronze in both the boys’ 16 years and over age group and in the men’s senior championship.

There were also bronze medals for both Jess O’Herlihy and Daisy Rummery in the 400m freestyle.