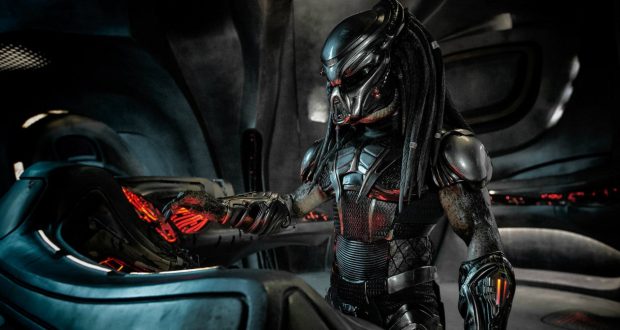 HUNTER KILLER: One of the Predators on show in The Predator, which evokes memories of the classic 1987 original.

Like many, I’m sure, I was a fan of the first two Predator films back in the late 1980s.

I mean, what wasn’t to like about action heroes Arnold Schwarzenegger and Danny Glover going toe-to-toe with blood-thirsty aliens?

However, after the dreadful Alien versus Predator spin-off, I’d left the series behind (and wasn’t even aware that three films have been made since then).

But time is a good healer – and upon seeing the trailer for The Predator, I felt ready to give the franchise another go. And, for the best part, I’d say that this is something of return to form.

As is often the case these days, the latest offering of Predator action feels much more like the classic 1987 ‘Arnie’ offering.

There is hardcore action to be had here, with gore galore and a rowdy cast of characters that are surprisingly likeable.

Leading the way is mercenary Quinn McKenna (Boyd Holbrook), a former soldier who is in the unfortunate position of coming face-to-face with a Predator in the opening sequence.

He unintentionally puts his gifted son Rory (Jacob Tremblay) and estranged wife Emily (the underused Yvonne Strahovski) in harm’s way after escaping his showdown with everyone’s favourite alien hunter and is forced to become part of another group in a bid to save them.

Thrown in with the self-proclaimed ‘Loonies’ – a group of psychologically damaged veterans – he must convince them to help track the Predator in a bid to save his family.

Nebraska Williams (Trevante Rhodes) is the pick of the Loonies, but there are solid turns by Keegan Michael Key, Thomas Jane and Alfie Allen too.

That’s without mentioning the villainous Traeger (Sterling K Brown), who is one of the better performers.

But who am I kidding, it’s all about the Predators, right?

This time around there are two, one smaller version and a huge ‘end boss’ style offering.

It’s fair to say that they serve up some savage scenes between them, with the gore-heavy battles big crowd pleasers.

There’s also a forest-style rumble that evokes memories of the original, but never really gets close to reaching that kind of level quality-wise.

The plot is solid enough here, but it’s major inconsistencies that leave a bad taste in the mouth when the credits rolled.

For example, Munn’s character seemingly becomes a gun-toting warrior overnight, while young Rory – who is on the autism spectrum – is pitched as the key to defeating the Predators, but suped-up weapons soon take his place.

The Predators themselves, despite being absurdly overpowered, seem less intimidating than in the past, too. I also felt that the plot involving both Earth-based Predators was badly explained, which was another frustration.

However, as an action offering that doesn’t take itself too seriously, there’s plenty to enjoy here.

There’s also an intriguing set-up for a potential sequel that perked my interest.

If, like me, you are looking for a reason to dive back into the Predator series, I’d suggest that this is a decent time to take a peek.