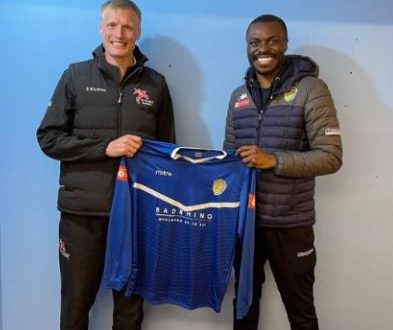 Spalding United manager Gabriel Zakuani says there’s “a buzz” around Spalding United as they made two signings that will whet the appetites of Tulips fans.

Seasoned Northern Premier League players – defender Nathan Stainfield and striker Gregg Smith -– have returned to the club for next season.

And with Zakuani confident that most of the players who signed for him after he got the job last October will be sticking around for the 2021/22 campaign, a strong squad is already starting to form.

“I’ve been planning for next season for a very long time and it’s definitely good to get it rolling,” he said. “Stainfield is a leader and someone who works hard.

“His name kept coming up with people who know the area and in the club itself as someone who has all the attributes I’m looking for in a defender.

“He’ll put his body on the line for the club.

“Gregg’s a fine striker with a great goal record and who I knew was available.

“He’s a strong forward and I feel that physicality up top is something we’ve missed from what I’ve seen at the club.

“He’s someone who will allow the quick forwards to play around him and will be a good addition to the squad.”

On more incomings Zakuani continued: “There’s a few I’m talking to and I’m maybe looking to bring another two or three in.

“I think I did a decent job of building a competitive team and now it’s just a case of adding two or three new faces just to add a bit of competition.

“Everyone doesn’t look at Spalding now like a small fish.

“Now it’s time to focus, work on getting points on the table and look to target a cup run and back up all the hard work that’s being done behind the scenes.”

Stainfield (32) was a consistent regular for the Tulips after joining from Boston United and has enjoyed successful spells with Gainsborough Trinity and Stamford since.

He said: “I am excited to return to Spalding United. It is a club that I have always held close to my heart.

“Many good people have helped to make this happen and I hope I can return their faith with some good performances.

“Signing forms and seeing some friendly faces who make this club what it is has got me excited about wearing the shirt again and walking back out on the Sir Halley turf!”

Smith meanwhile returns to the Tulips after last playing for them in 2015.

The 31-year-old striker has played for a host of local clubs and was most recently at Gainsborough Trinity.

He said: “I am looking forward to the challenge ahead! I loved my first time at the club and can’t wait to get started.

“This is a great new adventure for me and my family.”

l The Tulips have also been handed their first competitive fixture of the 21/22 season. They’ll take on Grimsby Town in the Lincolnshire Senior Cup sometime in late July.
The Mariners were last weekend relegated from the Football League.