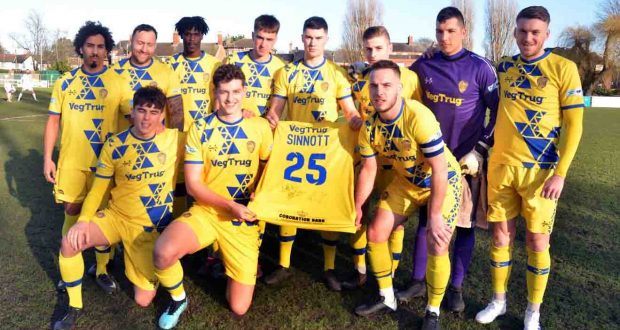 KIND GESTURE: Spalding United hold a Tulips shirt that has been signed by legendary England keeper Peter Shilton. It wil be sent to ‘Shirts For Jordan’, an initiative that is raising money for former Matlock Town player Jordan Sinnott, who died following an alleged assault last month. Photo supplied

Spalding United ended a turbulent week with a defeat as a youthful line-up were seen off 3-1 by promotion-chasing Belper Town on Saturday.

Belper, however, had been in a position to strengthen their squad, making the situation far more difficult for a Tulips outfit, with an average age of just 21 and little or no experience at BetVictor NPL South East Division level.

But, despite conceding two early goals they grew in strength and stature to make certain traffic was not going to be all one way.

And, with a bit of good fortune, could have sprung a surprise or two, going near to closing the gap on occasions and missing out from the penalty spot when Jamie Jackson’s 46th minute spot-kick was well-saved by Ryan Musslewhite.

Interim boss Thorogood said: “After a difficult week it would have been easy to roll over and fall apart in a physical game.

“We have a very young side with an average age of just over 20, but they showed character and determination and played some good football.

“Mistakes will happen. But we must learn from these and improve every week.

“The future is certainly bright with an exciting squad of players. Stick with us and watch us grow!”

There was expected to be a bit of needle in Saturday’s clash at the Sir Halley Stewart Playing Field, given that the sides had drawn the reverse 2-2 just two weeks prior.

Belper took the lead in the ninth minute through new signing James Carvell, although he did appear to control the ball a little with an arm before rifling it just inside the near post and beyond keeper Michael Duggan’s outstretched right arm.

His close-range shot was blocked by Ben Richards at the expense of corner.

But the resulting flag kick found the head of Phil Watt and Duggan was again well beaten.

The Tulips refused to lay down though, and duly bounced back.

Jackson rounded on Richards’ booted clearance and jigged past a couple of defenders before bringing a good save from Musslewhite.

Then James Hugo went on a romp down the left side, but his pass over the visiting area was just out of reach for Jackson.

The 30th minute brought reward for the hosts, as Richards sent Kevin Bastos on a run and he did superbly to brush aside the attention of Kyle Bryant and Danny South near the corner flag.

He found Gianluca Bucci who sent the ball crashing towards goal, but itwas turned past Musslewhite and into the net by Wright.

Bastos was beginning to pose a few tricky problems for the visiting defence with his pace and ball control.

He set up Jack Smith, who forced a save from the keeper. Jackson was denied by the crossbar and teenager Tobias Liversedge – on his debut – also went near with a solid shot.

Then, in added time at the end of the first period, another effort from Smith skimmed the crossbar.

Two minutes into the second half skipper Jan Yeomans was brought down just inside the Belper area and the Tulips had the perfect opportunity to level the scores, but Jackson’s spot kick was well saved.

In a scrappy second half riddled with numerous stoppages and cautions, Belper were down to ten men for the final 30 minutes with Sam Wright sent off after picking up his second booking of the game.

But the Tulips were unable to take advantage of the extra player and, with ten minutes remaining, conceded a third goal with Watt on target following a neat pass by substitute George Milner.

The loss sees Spalding fall to a season-low 14th place in the table. 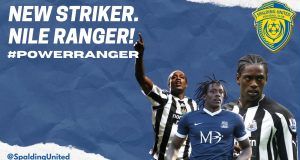 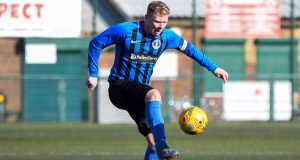