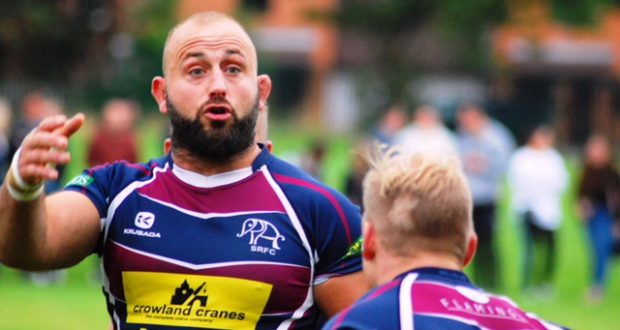 Spalding RFC were left extremely disappointed after slipping to a 19-15 defeat at Northampton BBOB in a game they dominated for long periods on Saturday.

Town had led by ten points at half time as they aimed to secure an all too elusive away victory in Midlands Three East (South), but a late converted try sealed their second defeat of the season.

Northampton, promoted to this standard last season, were put under the cosh by the Elephants early on as the forwards imposed themselves well.

Ash Anker was dominant with his carries and also as the front jumper in the lineouts, while Harry Sharman was using his experience playing at number eight and new locks Connor Lilburn and Macaule Crane soon settled down.

In fact, Spalding dominated the first 20 minutes with Northampton rarely getting out of their half.

The breakthrough was achieved by scrum-half Will Shields, who followed up the forwards who were picking and driving – led by John Barratt and Jacob Greaves.

The ball was recycled to the back of a breakdown and Shields spotted a gap and nipped through and rolled over the line.

Spalding continued to press and after 30 minutes won a lineout. Anker’s carry saw him break through a couple of tackles and pass to Sharman, who scored near the right corner flag.

However, from the restart kick Northampton BBOB were able to peg back Spalding into their own half.

With a ruck established, Town had possession. An attempted clearance box kick was charged down and the hosts won a turnover.

The hosts passed quickly along their backs out to the right wing, but Spalding’s initial defence was strong. The home team’s forwards were quick to the breakdown and a pick and drive to the line and they had their opening try.

The Elephants responded and again pinned the home team back deep in their half and, from a knock on, they won a scrum on the five metre line.

Sharman, from the back of the scrum, broke down the blind side for an unconverted try just before half time to put his side ten points up.

Having taken a knock in the first half, Shields was substituted for Tom Wilson who slotted into the backs.

That ensured that Sharman went to scrum-half and Jason Steels moved from centre to number eight.

The game started to become more open but still Spalding looked the better team. Going into a ruck Tom Wilson, near the half way line, handled on the floor and conceding a penalty, which also saw him yellow carded.

Flanker Jake Reid moved to the centre and Northampton’s forwards started to impose themselves with a man advantage, with Town having to defend and tackle but they held out for the ten minutes.

Wilson was soon back on the pitch but Anker, going into a breakdown, was pushed into a ruck and accidently landed a knee to the back of a Northampton player – which saw him yellow carded.

This time the home team capitalised, as they broke through Spalding’s defensive cover to score. With a successful conversion, Town’s lead had been reduced to three points.

Play was now opening up, with the home team running the ball out wide and Spalding counter attacking.

With ten minutes left on the clock, Town had a penalty 45 metres out and Conall Mason elected to kick for goal rather than for a corner lineout – and the effort fell just short.

A few minutes later Northampton offended and, from a similar position Mason was handed the ball to have another kick at goal, with a similar result.

With time nearly up, Spalding gave away a penalty on the half way line. Northampton took a quick tap, spread the ball wide to their left wing and, with the away defence stretched, they ran in the winning converted try seconds before the final whistle sounded.

This Saturday sees Spalding host Mellish – who are something of an unknown quantity – in the RFU Senior Vase (3pm).