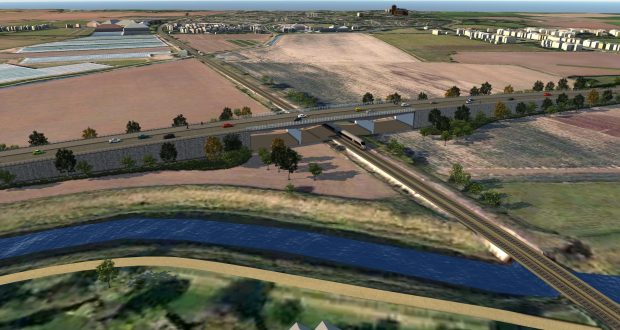 The proposed bridge over the railway as part of the Spalding Western Relief Road's northern section.

Work has officially begun on the first section of the Spalding Western Relief Road with an aimed completion date of Autumn 2023 having been revealed.

What is intended to be the first of five sections to be accessed from a new five-way roundabout off Pinchbeck Road is being created in the north of the town.

Lincolnshire County Council, which is over-seeing the project had said it wanted to start work in winter 2019 when in March of that year it submitted the planning permission for this most northerly section and the southern section.

Work was delayed following South Holland MP Sir John Hayes asking the government to ‘call-in’ the decision, something they declined to do, and by increased costs of a bridge spanning the railway and issues over the land ownership.

Funding is still being sought for the three middle sections.

“Now that work has officially started, the team will be focusing on building a new five-arm roundabout on Spalding Road, a T-junction next to Vernatt’s Drain and a new bridge over the Lincoln to Peterborough rail line.

“Although there shouldn’t be any significant disruption on local roads until this autumn, some occasional temporary traffic management will be required for utility diversion works.

“Two Plank Bridge, its connecting footpath and the footpath on the Wygate estate across the rail line are also now closed to ensure the safety of everyone that uses them.

“This is while we replace the old wooden bridge and carry out large-scale engineering works along the path as part of the relief road project.”

From late Autumn 2022, a combination of road closures, reduced speed limits, and temporary traffic signals will be used as needed for the remainder of the project, including near Enterprise Way and Spalding Road.

More specific dates and details will be shared once finalised and confirmed, Lincolnshire County Council said.

Coun Davies continued: “As part of this massive infrastructure project, we’ll be installing nearly 3,000 underground pile foundations to support the new bridge. I want to thank everyone in advance for their patience, as some of this work may be noisy.

“Rest assured that the team will be doing everything they can to keep this any disruption to a minimum. This includes carrying the works out in the daytime only and using a special hoarding to lessen the noise impact.”