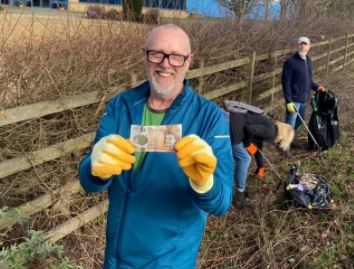 A lucky find for one Womble.

The fame of Spalding’s Wombles is spreading as the group featured on national television at the weekend.

With more than 2,000 members and big plans for the future, the group is inspiring others around the country to begin their own campaign of litter clearing.

An appearance on the BBC Look North show on Friday was followed the next day with BBC Breakfast.

The Wombles of Spalding Common only started at the beginning of this year and members have so far collected more than 2,000 bags of litter from the streets of the town and surrounding area.

The group’s Facebook page was soon being contacted by people from across the country.

“It’s lovely to see the community coming together to fight back against the terrible litter problem we all seem to have,” said Jon Chilvers, of Warwickshire.

“Thank you for raising the profile of volunteers all over the UK,” said David O’Brien, of North Wales.

The founders of the group are now awaiting the delivery of a batch of new rubbish bins which the Wombles have bought with donations.

There are also plans to create Street Ambassadors for those people who can’t get out and about to physically help litter-pick.

“We will also start the support of our schools this week. Our first donation will be delivered to Monks House. We are also supplying equipment to two social care establishments. None of this would be possible without the support of you all and our sponsors,” said Simon Law, one of the group’s founders.

“You have raised the bar above and beyond what we ever expected from this group.

“People are making new friends and you are making this place and the surrounding villages a great place to live again,” he added.

And street artists Karl Barfoot and Adam Moono have been back to the arches in Spalding to continue their work. A portrait of 60s star Jimi Hendrix (pictured top left) by Karl has decorated one area and cartoon character dragons another.

Meanwhile this weekend saw the Wombles out and about in force collecting more rubbish around the area.