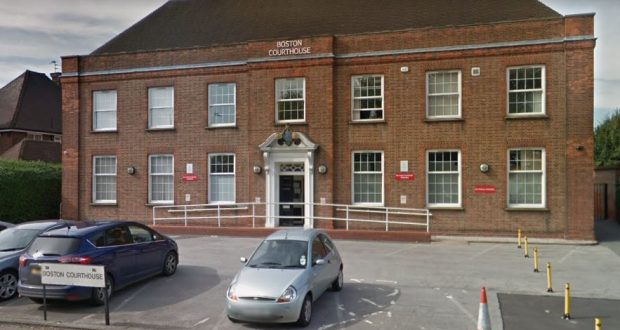 A woman who was barred from a Gosberton pub smashed bottles behind the bar there, assaulted the landlady and stole liquor, a court has heard.

Leanne Thornton, 39 of Bowditch Road, admitted three assaults by beating, one of damage and one of burglary, as well as failing to comply with the community protection order, when they appeared at Boston Magistrates Court.

Prosecuting, Marie Stace said both of them were barred from the Bell Inn in Gosberton but, on April 17 at 5.15pm, Thornton went in and after being reminded she was barred, had asked why and when told it was
because she had been abusive towards the landlady, she reiterated the abuse.

Ms Stace said Lowe followed Thornton into the pub even though members of the public had tried to stop
him.

She said Thornton refused to leave and grabbed the landlady, Fay Hanmore-Harling, by the throat,
scratched her hands and arms and grabbed her by the hair and banged her head on a pillar as customers
tried to pull her off.

She said Thornton then went behind the bar, smashed the optics in the spirit bottles and opened the beer
taps, stole a bottle of gin and threw a bottle at a customer, hitting him, before both she and Lowe left the
pub.

Ms Stace said Lowe was subject to a suspended prison sentence for possessing a knife and Thornton was
on an existing community order for offences of violence.

Mitigating, Vicky Clayton said Lowe could only be fined for the offence he was charged with but he did
accept he had followed Thornton into the pub and argued with the landlord and landlady.

She said Thornton had a mental health history, suffered from schizophrenia and had a drink problem
which she was trying to control with the help of the probation service.

She said Thornton’s father had been a regular at the pub when it was under the previous management but the new managers had refused to allow her to hold a wake there for him following his death in 2021.

She said Thornton recognised things had got out of hand and accepted her behaviour had been appalling.

The magistrates said they did not want to interfere with the treatment she was receiving for her mental
health issues and the remaining 21 rehabilitation days she had on her community order, but she had
pleaded guilty to three assaults.

She was sentenced to a total of eight weeks in prison suspended for a year and ordered to pay £50 compensation to each of the three people she had assaulted, as well as £128 in court charges.

Lowe was told the suspended prison sentence was not being imposed but a further three months were added to the operating period and he was fined £200 and ordered to pay a total of £119 in court costs and charges.

Both of them were made subject to a one year exclusion order relating to the Bell Inn.