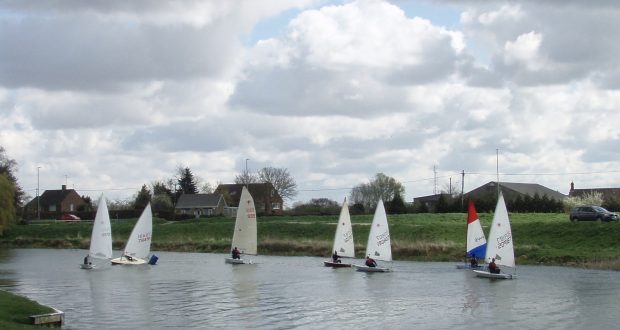 BACK ON THE WATER: Andy Prior took the honours as Welland Yacht Club returned to action.

Andy Prior was back on top as Welland Yacht Club’s 2021 season got underway on Sunday with the Robert Creek Shield.

Contested over two races, seven boats took to the start of the first one.

With a reasonable breeze accompanied by strong gusts Prior (Laser) took the early lead in the short reach to the first mark followed by Tom Bell (Laser), Geri van Haren (Phantom), Gail Follington (Laser Radial), Katie Follington (Topper) Alan Cox (Laser Radial) and Alistair Mitchell (Laser Radial). Once around the mark Prior, Bell and van Haren had pulled out a lead from the rest of the fleet.

This was to be expected considering the class handicaps as the gusts caught some out leading to a few early swims.

Prior still held the lead from Bell and van Haren who were neck and neck for second as the three began their second lap.

Cox had moved to fourth from Gail Follington fifth, Mitchell sixth, with Katie Follington in the Topper opting to take a single lap time.

Prior maintained his lead on the water to the end with van Haren second and Bell third across the line.

Prior would keep first place once handicaps applied with Bell now second and Cox third.

Only four boats took to the start for the second race, with Prior just edging away from van Haren at the start closely followed by Cox then Mitchell.

However van Haren took the lead as they rounded the first mark and headed off up river to the lea mark, the pair pulling away from Cox and Mitchell.

Once around the mark Prior got caught by a gust and capsized, Cox also found himself in the water whilst trying to keep clear of Prior.

That allowed van Haren to pull away and look to keep handicap distance between him and the rest of the fleet.

Cox would retire from the race once back at the clubhouse.

Prior had started to reel in van Haren‘s lead as the remaining three started their second lap and he retook the lead towards the end of the final lap to be first back.

Once handicaps were applied Prior made it a win double and secured the overall win.

In second was Mitchell, who was also second overall, with van Haren third.
Cox was third in the overall standings.