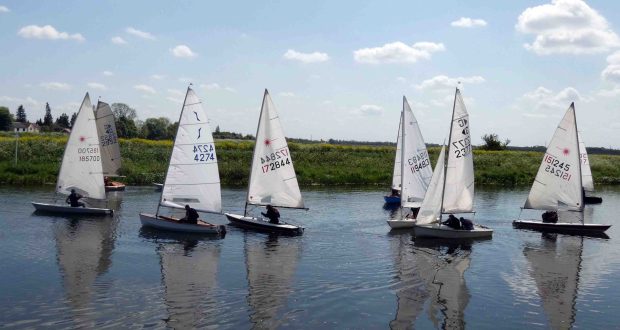 TIGHT AT THE TOP: Andy Prior edges ahead of Nick Bonsor in race three on Sunday.

That man Andy Prior was back on winning form at Welland Yacht Club on Sunday.

The first two races on Sunday followed the pursuit format – which is where slower boats start earlier relative to their assigned handicap and faster boats start later, in theory evening out the fleet over the course of 50 minutes when all boats, sailed equally and in equal conditions, would all reach the same end point.

This was a new concept for many of Welland’s sailors and, in race one, only four of the ten boats made it to the start line at their allotted time (all eventually started the race).

About ten minutes before the end of the race, Andy Prior (laser) led with Gerri van Haren (phantom) and Martin Cook (solo) not far behind.

Positions changed a little in the latter half of the fleet as the boats rounded buoy one again and were fighting to overtake on the downwind stretch.

Clive Herd and Natalia Safianowicz (graduate), who suffered a grounding incident not far from the finish.

Race two began with all boats successfully reaching the start line ahead of their allotted time.

The final leg was the most exciting with positions changing as boats found small gusts of wind or stalled and were overtaken.

In the lead was Prior, from Herd and Safianowicz, van Haren, Holland, Tack and Slater and Cook.

Final positions were hotly contested in the final four, ending with Bonsor, Parsons, Holland and Boyd.

Race three was a standard style undertaking, but after the start the first leg up to buoy one was chaotic with a dropping wind and some interesting rules being applied for rounding the buoy.

Emerging from the chaos came Prior in front and Alan Cox (laser) in second, then Herd and Safianowicz.

Final results following handicap had Prior victorious, with Cook in a valiant second place and Cox in third.

The day gets under way at 10.30am and ends at 3.30pm, with refreshments available.

Taking a change of clothing and footwear is recommended.

The club will welcome allcomers to their Cradge Bank base and encourage all to give sailing a try.