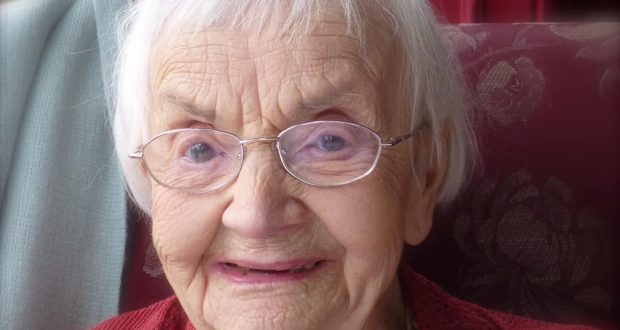 Violet, the third oldest person in the country, dies aged 112

The third oldest person in the country has died in Spalding at the amazing age of 112.

Violet Davies-Evans was just one day younger than the two oldest people, who share the birthdate of March 29, 1908.

Born in Sutterton as the third sibling of four sisters and a brother, she lived in a handful of places around England and had resided independently in a bungalow in Spalding’s Tollgate to well past the age of 100, before moving into Ashwood Nursing Home in 2014.

And it was there in Spalding Common that Violet, or Vi as she was known to her family, passed away in her sleep on Tuesday. (May 5)

Nephew Mike Lawton (74) said she was “definitely a real character”, a mixture of a very kindly aunt and at times a cross between the character Hyacinth Bucket in the TV sitcom Keeping Up Appearances and the late actress Joan Sanderson.

“My wife was a little overawed at first when we would go there for tea because Vi would have china tea cups and used tongs to get the cubes of sugar!” Mike recalled. “She was once taken shopping to Peterborough by a friend and they ended up with quite a few bags between them. ‘Get a porter,’ she said.

“So in some respects Vi was almost from a different era. But she was a smiling and joyful lady who liked socialising and eating out and loved to sing.

“Vi was very lucid until quite recently and enjoyed talking to the staff at Ashwood, who were so kind to her. She was happy to move in there as it seemed like a hotel.”

After a first job at drapery and haberdashery store Pennington’s in Spalding’s Hall Place, Violet became a beauty specialist working in London for Elizabeth Arden – founder of the famous cosmetics company – and had several well-to-do clients.

Throughout her life, she would never wash her face, preferring cleansing creams which kept her skin looking younger.

Violet (née Head) married her talented and well-respected teacher husband Hubert in 1938 and together they enjoyed a busy social life with famous people as friends.

At the start of World War Two, Elizabeth Arden offered Violet the relative safety of a job in America but her employee turned it down, preferring to stay in Marble Arch.

“Vi felt she had a job to do here and went on to fire-watch on the roof tops in London,” said Mike.

At that point, her day job was personal assistant to Chris Hinton (later Baron Hinton of Bankside) in the Ministry of Supply.

During one hotel stay for a conference, a man burst in on Violet as she was having a soak in the communal bathroom. She quickly grabbed her towel and put it over her head.

“I asked her why she didn’t cover her body,” said Mike. “She replied: ‘Because I would have met him the next day and I didn’t want him to remember my face!’

“She had a good sense of fun.”

Until he was 18, Mike lived in Spalding’s Park Road with his parents John – a solicitor’s clerk at town firm Maples and Son – and Minnie (Violet’s sister).

Mike said his aunt had a significant influence on his life, helping to shape his behaviour and outlook as a teenager.

“Vi was formative in my life,” he said. “She and my uncle bought eight acres of land with a bungalow on in Oxfordshire.

“I would spend all my summer holidays there.

“I can remember going to (West End actor) Alastair Sim’s on a Sunday morning for cocktails with George Cole.

Spalding in the 1950s was fairly parochial so to suddenly be able to mix with those kind of people was really quite something.”

When Hubert passed away in 1975, Violet moved back to Lincolnshire, first living with her widowed sister May in Osbournby.

When she later moved to Spalding, Mike and wife Claire would visit regularly from their home in Warrington, taking her a month’s supply of frozen meals.

Violet had a penchant for red wine and even up to and beyond 100 years old she would order a case from specialist Laithwaite’s.

The firm recognised her 100 th birthday in 2008 with a delivery of her favourite, Black Stump, and a fine bottle of English Champagne from owner Tony’s wife’s vineyard.

That was the kind of reverence with which Violet was held throughout her long and esteemed life.