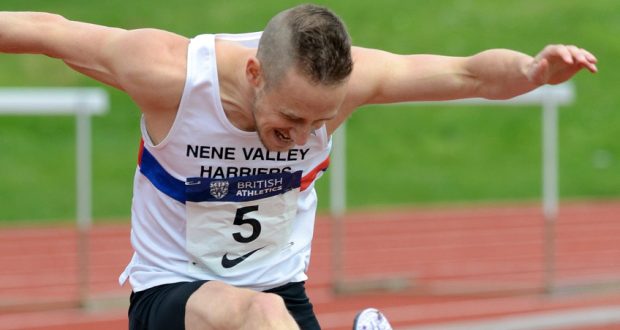 DETHRONED: Sean Reidy improved his personal best time but was beaten to gold in the British over-35 400m hurdles.

At the age of 60, Ricky Huskisson clocked 7.93secs in the 60m to put him top of the national rankings for his age group.

Huskisson also competed in the 200m, crossing the line in a time of 26.34secs.

Sean Reidy ran 56.84secs in the 400m hurdles at the meeting last year, which was a new British over-35 indoor record.

Full of confidence this year, the 39-year-old set off quickly and looked in control until the last few strides, when he was overtaken by big rival David Awde (Woking AC).

Despite losing his British record, Reidy improved his own personal best (PB) time to 56.36secs.

“There are a lot of top hurdlers in the over-35 age group, so I knew the record would go sooner or later,” said Reidy. “That said I think I dragged David round to a great time!

“I probably had a better chance of keeping the record if I hadn’t run, but that’s not my style. I love to race.”

Elsewhere, improving pole vaulter Gemma Skells set a new PB of 2.30m, and Claire Smith ran her fastest 400m as an over-40 with a time of 63.50mins.

Also in action was 400m specialist Dave Brown, who stepped up to the 800m and blasted his way to second place in a time of 2.06.48mins.

Youngster Joel Stern also guested in the 60m, running 7.57secs to take half a second off his PB.

Club vice chairman Tim Needham was another in action throwing 7.64m for second spot in the shot put competition.

Freddie Fraser and Joseph Purbrick have enjoyed superb starts to 2020 and sit 1st and 2nd in the under-17 rankings.

Max Roe is in second place in the under-15 rankings after recently clocking 8.46secs at Lee Valley.

Darryl Coulter clocked 1.39.33hrs when finishing 158th in the Victoria Park Half Marathon.

Meanwhile, team-mate David Marr was some 21 places further back with a time of 1.41.22hrs.