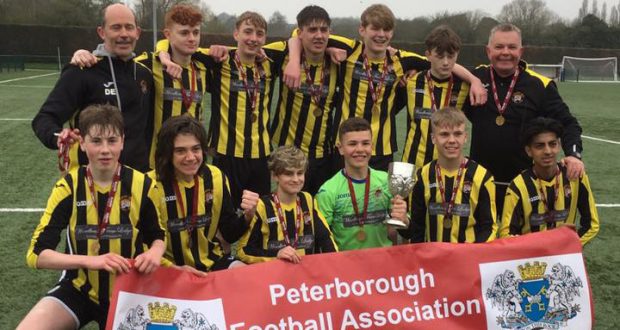 Joshua Ling and Harvey Wirkowski notched in the first half to give the young Tigers a 2-0 half-time lead at In2itive Park – and they held on for glory despite a strike from Sports sub Kyall Woods.

It’s the first time a team from Holbeach has won a PFA Cup crown since the 1986/87 season, with under-15s assistant boss Dean Elston and club official Christian Stebbings both part of the team that won all those years ago.

But that doesn’t tell the entire story, with the Tigers only able to take a squad of 11 to the clash due to the final being arranged during the Easter holidays.

Four of the squad were away on holiday, while their regular keeper was cup tied.

That meant they had to play top scorer James Clark in goal – but he defied the odds with a man-of-the-match performance.

Proud boss Stuart Clark, who spent the entire week trying to get the game moved, saluted what he called an “unbelievable achievement”.

He said: “To go there and win with a squad off 11 and James in goal was an unbelievable achievement – just fantastic.

“For us to be the first team from Holbeach to win a PFA Cup in 31 years is amazing. It’s great for Dean too, what a story that is.

“It just shows what can be achieved with hard work, looking out for each other and playing as a team. To reach one final is an achievement but to get to both in a season – winning one and losing the other on penalties is a fantastic performance.”