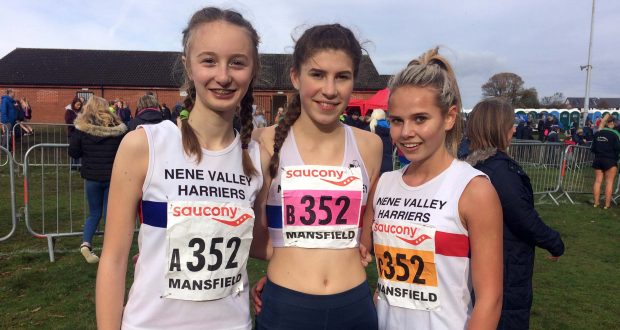 Nene Valley Harriers had a great day in the Mansfield mud as they excelled across the age groups in the National Cross Country Relays staged at their traditional Berry Park venue.

Pride of place went to the under-17 girls, who exceeded expectations by finishing 22nd out of the 64 teams.

Josephine Fortune ran the first leg of the 2.5km course in a time of 9.54mins, and was followed by Ellie Piccaver and Amber Park with 10.19mins and 9.53mins respectively

The under-15 girls finished 45th out of more than 100 clubs, with Ella Robinson fastest on the day for Nene Valley with a 7.48mins clocking on the 2km circuit.

Nene Valley fielded two under-13 girls teams, with the A team finishing 48th of the 104 clubs and the B team 90th. Chelsea Bole, Lottie Hemmings and Amelia Devine all ran well.

The senior women had a good day with the A team (45th) and the B team (58th) both finishing in the front half of the field.

There was little to choose between the two teams with Emma Randall running the fastest A team leg, and Chloe Pavey fastest of the second string runners.

Nene Valley’s under-13 boys provided one of the day’s highlights. The speedy trio of Hugo Brill, Kai Chilvers and Joseph Reindel finished 26th, while the B team placed a highly respectable 60th out of the 97 contenders.

The under-15 boys also fielded two teams, with the A team 75th and the B team 84th. B team runner Matthew Colman recorded the fastest time of any of the Harriers, covering the 2k course in 7.25mins.

Aaron Hunt ran the quickest time for the under-17 boys, who finished 40th, 22 places ahead of the Nene Valley B team.

A junior men’s trio battled valiantly to finish 47th, while the senior men’s A team placed 84th out of 170 finishers.

Michael Channing impressed on the first leg as he covered the 5k course in 17.48mins.

The long-striding Latvian international steeplechaser, who previously won a Frostbite League race five years ago, has returned to Nene Valley after a few years living in Spain where he was a serial race winner.

Leading from the off, the 29-year-old was a class apart from the other front runners, and crossed the line at the end of the five mile multi terrain race in a time of 26.50mins, 30 seconds clear of runner up Michael Taylor of Riverside Runners.

Triathlete Paul Vernon of PACTRAC, who has won more Frostbite League races than any other competitor since the league began 30 years ago, finished fifth, and Bushfield Jogger Phil Martin came home seventh.

Ramsay Road Runner Lisa Marriott was the second lady crossing the line in 32.45mins, while Sarah Caskey (PACTRAC) and Emma Tomlinson-McCrae also made the top ten.

After two races Nene Valley and Riverside Runners are joint leaders in the league table.

The junior race was won by Angus Lawrence from Hunts AC, with his clubmate Isabelle Wilkins first girl.

Nene Valley Harriers’ Lottie Hemmings was the second girl home, leading her club to fourth place – which is also the position they hold in the overall standings.

Several of the area’s top runners made the trip north – and Nene Valley’s Philippa Taylor had the most to celebrate at she picked up the prize for finishing first over-50 female in a time of 38.38mins.

Jay Belham and Simon Bell both made it round in under-40 minutes, while Ruth Jones clocking 41.19mins saw her finish 11th out of 770 in her over-35 category.

Two Peterborough AC men made their mark on the race with Steve Robinson coming home 192nd in 33:56 and James Skinner a minute behind in 251st.

Nene Valley’s Bradley Allen clocked a time of 17.05mins, which was the fastest of the night and Ella Robinson, also of Nene Valley, was the quickest female as she clocked 19.27mins.