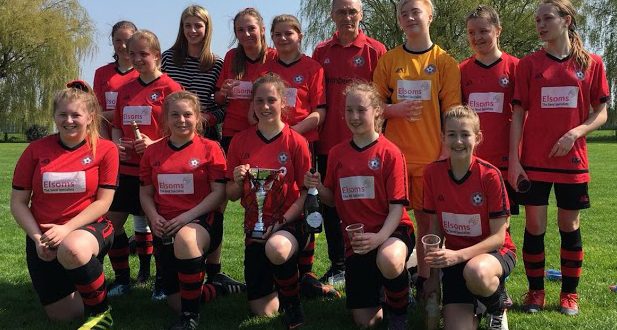 The girls kicked off their season with an away win at Holbeach United back in September – and after Saturday’s game they finished with 14 victories and two draws, scoring 73 goals and only conceding eight. Having only formed three years ago, the girls have come a long way.

Travelling across the south of the Lincolnshire and often beyond Cambridgeshire, the girls built up a reputation for high scoring games – with Courtney Walker leading the frontline with 26 goals.

She was followed by Caly Priestley on 16, Annie Vayro and Freya Peters (10) and Holly Coupland (9).

Captain Vayro has dominated the centre of the pitch all season and scored plenty of goals along the way.

Aided in the midfield area by Annabel Stockdale, Keavey Langford and Jade Lilley, with a very strong addition of Hollie Lewis after Christmas.

A great strength of the team was the two wide players – Priestly and Coupland – who are both great crossers of the ball and added to the scoreline in many games.

Peters has a free role in the team and can pick a ball up in her own area and still keep it all the way up the pitch, finding a deep cross at the end of her run, scoring many great individual goals.

Walker has shown real improvement this season, not only in her finishing but her determination to win the ball back