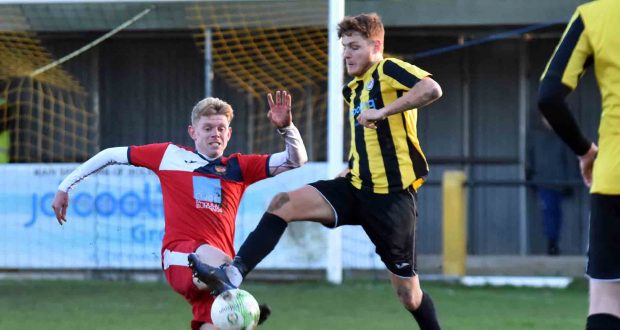 CUT SHORT: Holbeach United's season could have been a great one, but it's now over. JAKE WHITELEY

Pinchbeck United are “obviously very happy” that the FA have expunged all record of the 2019/20 season.

That’s the frank and honest assessment of player/boss Ian Dunn, who also admits that he feels for the teams that were having great seasons in the wake of last week’s big decision.

The Knights were looking odds-on to be relegated from the Uhlsport UCL Premier Division with just six points from 27 games.

Although Dunn insists that his side had “every chance of turning things around”, he conceded that Pinchbeck are one of many teams that will breathe a sigh of relief that the season is void.

“Of course I’m happy,” quipped the veteran performer. “All of the teams at the bottom, ourselves included, have been handed a reprieve.

“To be fair, I don’t really know what else the FA could have done.

“From our point of view, we still had a quarter of the season to go and three or four wins might have been enough for us to stay up.

“I know that’s quite a lot given our record this season, but you never know what a few new signings can do for you.

“I’m not going to stand here and lie; it’s great news for us. But I do feel very sorry for teams that could have achieved something.

“Look at Holbeach, they were in a final and flying high. Rothwell, their opponents in that final, haven’t reached many finals before.

“Stamford, Peterborough Sports and King’s Lynn were all having great years.

“They will be gutted and rightfully so.

“The truth is, even the experts don’t know what is going to happen with this virus. There was no point us playing in June or July, even if that was an option.

“We all need to regroup and go again next season.

“Football and any sport are secondary to the virus and people’s needs at the moment. That has to be the primary concern for all.”

Meanwhile, Holbeach United chief Danny Hussey backed the FA’s decision and felt it was the only choice.

He said: “I’ve said previously that this was the only and right thing to do

The season will not finish, nor will the new one start as per usual.

“Football, at present, is such a small concern on people’s radars and however the decision was going to be made it would upset certain teams.

“The PPG (points per game) idea wouldn’t have been fair with so many games left to play and teams having easier run-ins.

“It’s a shame the season has ended on this note, but we should look back at the season and for those managers carrying on they can start to prepare even earlier.

“Yes, clubs have lost money on expenses but they will also save five or six weeks’.

“I am gutted we won’t play in a cup final, our position when the league stopped was fifth and on a PPG ratio we would have finished fifth, so I have no ulterior motive to want things null and void.

“In fact I was confident we would have finished in the top three.”