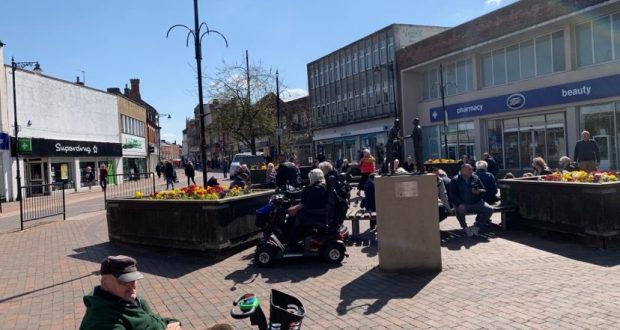 South Holland’s towns are beginning to look more like themselves as the majority of businesses reopened on Monday when more COVID-19 restrictions were lifted.

Non-essential businesses are now open, alongside pubs with beer gardens.

Many shops opened their doors for the first time, gyms welcomed people back into their properties and queues emerged outside hairdressers in the area’s towns and villages.

The centre of Spalding was beginning to look more like itself as shoppers returned.

Sue Stubley, of Occasions Jewellers, has only had the government grant as an income for the last few months and it has allowed her to pay the rent on the Bridge Street shop.

She’s invested in a new range of Absolute Silver and is back open five days a week after reducing the days in the mid-lockdown opening.

“We’ve been busy with batteries in watches. We’ve just got to hope that people regularly enough come for a look around the town and are feeling better about coming out and spending their money.”

It’s been a particularly difficult period for staff at Hills Department Store which, after some uncertainty, has been saved from possible closure by Coney’s clothing store in Lincoln and Boston.

Nick Snookes, the general manager at the store, now called Coney’s at Hills, said: “It’s been brilliant and we’ve been very busy.

“It’s been particularly nice to see so many faces again.

“It feels like we’re getting back to some kind of normality.

“We’ve new brands and had a complete refit upstairs.”

Robert Goddard moved premises to its Market Place store 18 months ago, but it’s only been open for collections for a number of those months.

“It’s been really good in all the stores,” branch manager Andy Woodthorpe said. “It’s great to be back.

“People seem to be more confident. I think last time lockdown was lifted people were more nervous about coming out, but many people have been vaccinated and with that extra confidence the town’s been busier.”

The next government target is for most indoor entertainment to open from May 17 including indoor restaurants and pubs and venues, although nightclubs will have to wait until June 21.