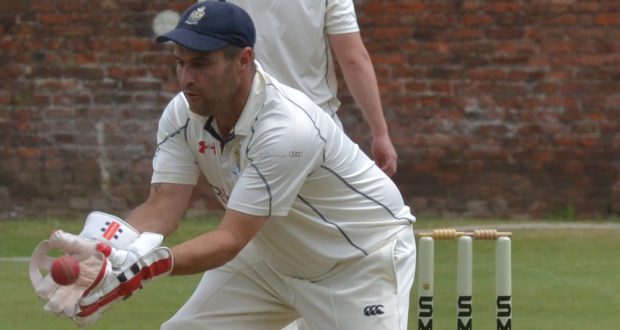 Rob Ambrose’s side looked to be heading for a crucial victory when they reduced Deeping to 101-5 in pursuit of Spalding’s total of 214.

However, Jamie Morgan came in at number seven for the hosts and smashed nine fours and two sixes in a pivotal match-winning knock of 76 not out.

Spalding had gone into the crunch clash four points adrift of their hosts at the foot of the league table.

Batting first, they made a solid start as the returning Josh Newton (42) and Warren Nel (12) shared a half-century opening partnership.

Despite both openers falling in quick succession, Luke Hollingworth (38) then continued in the same groove with another 50-plus stand with Ben Smith (17).

Faisal Javed (13) and Tim Norris (10) kept Spalding’s total ticking over before Dan Milgate weighed in with some lusty blows.
Milgate smashed three fours and two sixes in his 33 as Town were eventually bowled out for 214.

Zac Simmonds (3-23) was the pick of the Deeping bowlers with Ashley Sharpe and former Spalding player James Hook both bagging a brace apiece.

Spalding made a promising start to defending their total as Hook and home skipper David Sargeant fell cheaply to leave Deeping on 32-2.

However, Morgan’s arrival at the crease to join Barnes saw an 86-run partnership move Deeping closer to Spalding’s total.

Milgate claimed a couple of late wickets, but Morgan’s presence kept Deeping in control and they sealed a vital victory with just nine balls to spare.

The defeat leaves Spalding eight points adrift at the bottom of the table at the halfway stage of the season.

Louth’s defeat by Lindum on Saturday puts them back into the relegation zone in 11th place. But, above them, just six points separate the next five teams, including Grimsby who Spalding visit on Saturday.

The second-placed hosts were put into bat by Spalding who soon had both openers back in the pavilion with just 14 runs on the scoreboard.

However, Richard Hewitt (69) and Lachlan King (62) then joined forces to put Skegness back in control of the contest.

They put on 104 runs for the third wicket before Spalding rallied again with Julian Wilson (3-33) picking up a couple of mid-order wickets.

Jon Manton then swept through the Skegness tail with a 4-27 haul which saw the hosts eventually dismissed for 192.

Spalding struggled in the early stages of their reply as they slipped to 28-4 with King collecting three top order batsmen.

Skipper Matt Gill then led the Spalding fightback as he blasted eight boundaries to top score for his side with 61.

Matthew Sharpe (19) also aided the Spalding cause, but their reply eventually fell 44 runs short on 148-9.

They dismissed their depleted visitors for just 38 runs with Eddie Seymour claiming a superb 3-2 from a miserly six over spell.

Amelia Gardner (2-10) and Jack Sawyer (2-7) also claimed a couple of wickets each to put Spalding into a commanding position.

Despite losing a couple of cheap early batsmen, Carl Andrews (5no) and Nigel Gardner (11no) saw Spalding home for the loss of four wickets.

Pinchbeck were also dismissed cheaply as table-topping Graves Park bowled them out for just 38.

The Kirton side had earlier been dismissed for 145 thanks to a four-wicket haul from James Langford.

However, Lee Smith (15) and Mike Knight (10) were the only Pinchbeck batsmen to reach double figures.