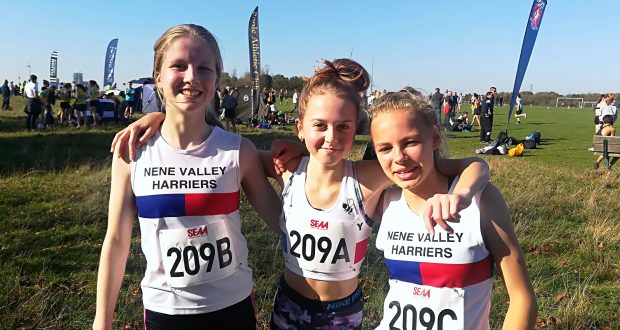 Nene Valley Harriers were on the run at Wormwood Scrubs as three teams took part in the South of England Cross Country Relays staged on the common close to the prison.

The most arresting performance of the day came from the under-15 girls, who finished in a pleasing 19th place.

All three athletes are in the bottom year of the age group and the club will be hoping that this proves to be their breakout season.

The same squad finished as runners-up in the under-13 section of the North Midlands Cross Country League last season.

Lottie Hemmings carried on the good work over the second stage, clocking 8.21mins to take to 18th position.

The final leg was run by Leonie Hart, whose time of 8.27mins secured 19th place for the talented teenagers.

The under-13 girls also ran 2km each and finished a highly creditable 26th.

Evie Hemmings led the team off in her first under-13 race for the club. Hemmings ran strongly, finishing 27th in 8.24mins.

Georgia O’Connell completed the second leg in a time of 9.33mins, with the club dropping one place to 28th.

Niamh Hodgson then clocked 9.11mins on the final stage.

The Nene Valley senior men got off to a fine start, courtesy of James McCrae who came home seventh after a 14.46 clocking on his slightly under 5km leg.

McCrae was the class act of the Nene Valley team, and though they fought hard it was inevitable that some ground would be lost as the relay went on.

Mike Chapman took the second leg and his competitive time of 17.02mins saw the team slip to 22nd.

Jay Belham was just 25 seconds slower than Chapman in the third leg, with veteran Paul Parkin clocking 19.48mins for the last leg and bringing Nene Valley home in 30th place.

The veteran has averaged a race of marathon distance or more every three weeks over the past year, and has plans to run plenty more.

Foster made a name for herself when finishing as ‘first local lady’ in the Peterborough Half Marathon – and with a marathon to run in Switzerland on the horizon, she decided to take it easy in Hampshire.

The 27-year-old failed to stop her watch as she crossed the line at the end of the ten-mile circuit, but knew her time was in the region of 68mins – which put her comfortably in the first 50 female finishers.

Much to Foster’s consternation, and with no explanation, the official results had her down with a finishing time of 1.25.14hrs and a position outside the top 1,000 ladies.