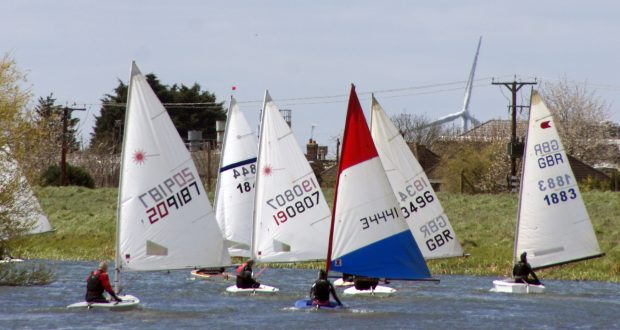 Top of the morning! Prior claims double in opener

Andy Prior sailed to a pair of victories as Welland Yacht Club’s Morning Points Series got under way on Sunday.

Some seven boats took to the start for the first race, with Prior (Laser) making the best start of the bunch.

As they tacked the short distance to the windward mark, Prior and Herd had soon opened up a lead over the following boats as they then began the long downwind run towards the lea mark.

But, despite finding herself at the back of the fleet, Follington knew that the Topper’s handicap would still leave her in contention of a high placing.

After the first lap Bell retired with a technical issue, but the order on the water would remain throughout the second lap until the finish.

With handicaps applied, Prior would hold onto the win from Follington in second and Herd in third.
Alistair Mitchell (Laser Radial) joined the line-up for the second race, making it a field of eight.

Again it was Prior making it first away from Herd, Bell, Cox, Agar, Holland, Follington and Mitchell. As they rounded the windward mark Agar made a gain of two places, finding himself in third as they made the long run up river to the lea mark.

A few of the boats endured dicey moments as Holland capsized and lost a place to Mitchell, before leader Prior repeated the trick and allowed the chasing pack to catch up.

Agar then suffered a broken boon near the end of the action-packed race.

Again it was Prior who was first across the line followed by Herd, Bell, Cox, Mitchell, Holland and Follington.
Prior held on to the win after handicaps, with Follington second and Bell just snatching third.

* Anyone wanting to find out more about sailing should contact the club via email secretary@wellandyachtclub.co.uk