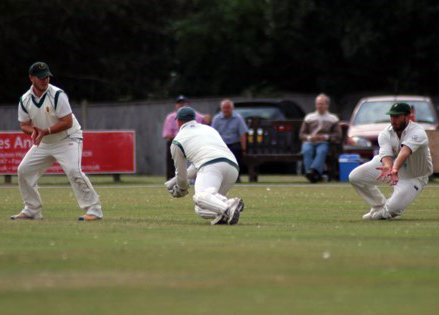 THAT IS OUT: Lincolnshire’s captain, Carl Wilson is pictured taking another catch while Nic Keast and Dan Freeman watch on. Photo by JOHN VAN-DER-VORD

Lincolnshire County Cricket Club’s hopes of retaining the Unicorns Eastern Division title for the fourth successive year were dashed when they fell to a heavy defeat by nine wickets to Norfolk CCC at Norwich.

The first session on day one proved crucial for the outcome of this match.

On winning the toss Lincolnshire elected to bat – but by lunchtime they had lost seven wickets.

This collapse continued immediately after lunch as they were dismissed for 158 in the 42nd over.

Only Shiv Thakor (42) and captain Carl Wilson (30) showed any form of resistance.

Andy Hanby (5-48) was Norfolk’s most successful bowler as seven of the Lincolnshire wickets fell to catches either by the wicket-keeper or slip fielders.

Norfolk utilised the remaining overs of the day to good effect. Although they had lost four wickets by close of play, they were close to Lincolnshire’s first innings total.

Lincolnshire stuck to their task on day two and took early wickets to get themselves back in the game.

Norfolk were eventually dismissed for 225 in the 79th over, with Tom New (61) and Ashley Watson (43 not out) being their main contributors.

That meant that Norfolk had a valuable lead of 67 in the first innings.

Lincolnshire’s task was now to occupy the crease and build a substantial lead.

Despite an opening stand of 43 by Joe Kendall and Jack Timby, wickets again fell at regular intervals.

Ben Coddington (38 off 83 balls) top scored but Lincolnshire fell well short of what was required and a total of 172 all out was insufficient to set Norfolk a difficult task.

The main architect of Lincolnshire’s downfall was Ashley Watson with 7-58.

Norfolk’s target of 106 was easily reached for the loss of one wicket, Sam Arthurton top scoring for the hosts with 68 not out.

Norfolk took 22 points from the match and Lincolnshire took four.

After the defeat Lincolnshire are now third in the Eastern Division table, and next play Hertfordshire at Hertford on Sunday.