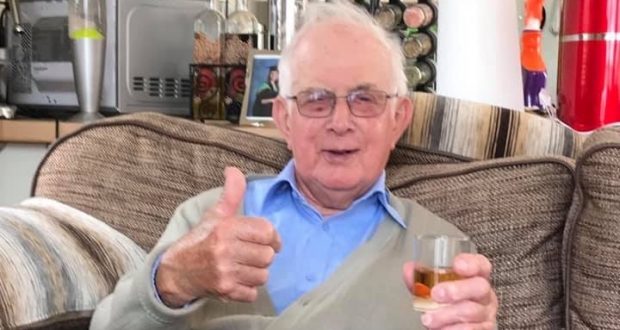 Members of Holbeach United have helped a volunteer who has been helping them out since 1946 celebrate his 90th birthday in style.

Peter Cousins had his big day on July 6, and the club helped him celebrate by gifting him a bottle of his favourite Famous Grouse whiskey and a card.

He’s been part of the ground staff for over 70 years and still helps out at Carter’s Park when he can.

Treasurer and former chairman Dave Dougill said: “A few of us went round to his house and had a lovely drink with him and wished him a happy birthday.

“We’d clubbed together and bought him a bottle of Famous Grouse whiskey.

“He’s been with the club since the late 1940s and he still goes to every home game and helps out in whatever way he can.

“He’s a real stalwart of the club and everybody felt we needed to do something. Pete is just a very genuine guy.”

Volunteer Neil Dawson, added: “I’m 72 and he keeps me and all the volunteers in order.

“He’d often come into the dressing room at games, and as he gets up so early every day you often find him asleep in there.

“Everybody at Holbeach knows him and he’s a lovely guy.”

Peter said: “I had a fantastic time and it was lovely to see the lads from the football club. Bless their hearts.

“A farmer asked me to go down and see the Tigers over 70 years ago and I’ve been down there ever since. They’re doing great things down there and there’s lots of good things to come for the club.”