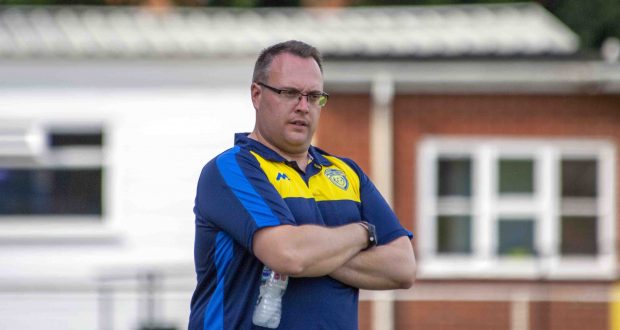 Pinchbeck United finally returned to action on Saturday – but they were handed a 3-0 home humbling by GNG Oadby Town.

A host of new signings made debuts for Lewis Thorogood’s new-look side, but they were unable to snap a losing streak that now spans seven games.

Despite the defeat, Thorogood was buoyed by much of what he saw and is hoping the side will gel over the festive period.

“It’s always disappointing to lose a game of football but it was a market improvement to those two games pre lock down where we looked like shipping 10.

“We had more experience, were stronger and fitter than before.

“We came out the blocks and dominated the early stages looking really good but we were unlucky with the penalty.

“I have my views on the penalty, I’m sure others have theirs, but looking at the video footage after I don’t think it was a penalty.

“In that second half we had some chances with Conner Bell hitting the side netting and Harrison Holland went close.

“I’m really encouraged by the chances we created and the signs of improvement.

“But the biggest thing is the continuity. That’s the first that group of players have played together and the first they’ve played competitively since lockdown.

“Oadby play the way they play, stuck to it and it worked. But you can see they’ve played a lot together over the past few seasons.

“For us it was like going into a new season without having played a single pre-season game.

“Individually we were strong which is a positive to take out of it.

“Collectively we need to gell and the only way to make that happen is to play more games of football.

“You can have all the training sessions in the world but you won’t be able to gel as a collective without games.”

Pinchbeck paid tribute to the late Mervyn ‘Ogy’ Lane prior to the match after his death a few weeks ago.

They are back in action at Shepshed on Boxing Day in what is the only festive fixture involving South Holland sides (1pm).