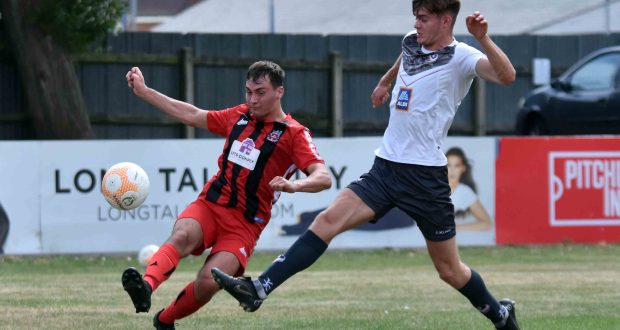 Goals in each half from Ethan O’Toole (45) and Matthew Bowman (64) earned the visitors all three points in front of a crowd of 50 at the Sir Halley Stewart Playing Field.

It always looked a very tough opener for Thorogood’s Knights, with Loughborough expected to be amongst this season’s title contenders.

“They are as good as I expected them to be,” admitted Thorogood. “Very well drilled, very fit, great stamina and, to be honest, they didn’t seem to break a sweat all game.

“We had a good chance at 0-0, but other than that it was a tough day for us. It’s a shame as we showed great form in pre-season, but in a way losing 2-0 isn’t a bad result against them.

“It’s a shame that we conceded just before half-time, albeit to a well-worked goal.

“That changed the game a little bit really and they ran us a little ragged after that.

“The highest praise I can give Loughborough is that they play and conduct themselves like a professional outfit.

“It’ll be interesting to see how they go this season, I can’t imagine many teams being on their level.

“For us, we need to dust ourselves down and move forward.

“Pre-season showed that we’re a very capable team and we won’t face teams like Loughborough every week.”

Pinchbeck lost striker Avi Vieira to a calf strain early on, but it was hoped that he’d be fit for tonight’s (Wednesday) derby against Wisbech Town (7.45pm).