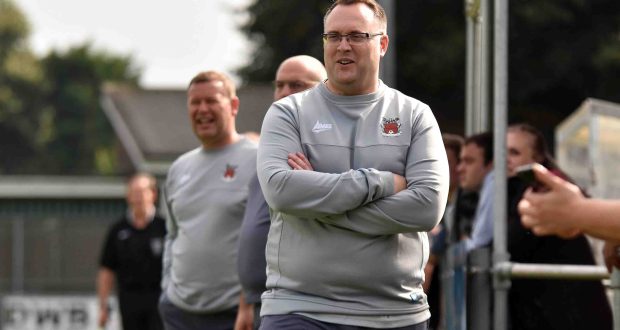 Lewis Thorogood is hoping that the poor state of their Sir Halley Stewart Pitch will give them the edge of Heather St John on Saturday (3pm).

The Knights are in urgent need of a win as they bid to get themselves out of the Uhlsport UCL Premier Division drop zone, with this the first of their six remaining fixtures.

Heather are fifth in the standings and known for their passing style of football, but Thorogood is quietly confident that his side are capable of upsetting the odds.

“Nobody is playing good football on the Sir Halley any time soon,” joked the Pinchbeck boss. “It’s in a very poor state now that it has hardened up.

“The surface is bobbly and both sides will need to adapt.

“Heather St John aren’t known for being direct and physical, but that’s the kind of style that will suit the surface.

“But it’s absolutely imperative that the work rate and intensity is there for the entire game. We’ve only got six matches left and need every point that we can get.”

Pinchbeck will be without key defender Neal Spafford, with his hamstring injury likely to keep him out for up to three weeks.

Fans can pay what they want on the gate for the game, as part of non league day.

All proceeds will go to Prostate Cancer UK.