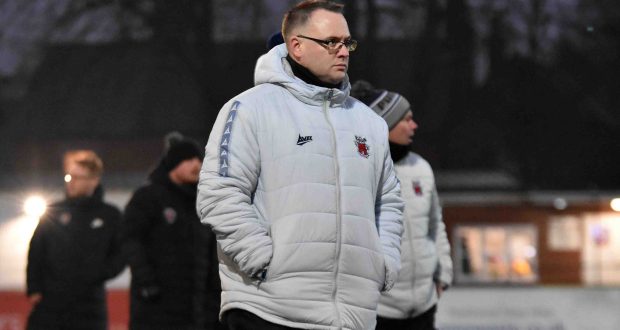 Lewis Thorogood has told his Pinchbeck United players to roll up their sleeves and prepare for a relegation battle in the final 12 games of the Uhlsport UCL Premier Division North season.

The Knights are 16th in the 18-team division after 22 games, but 17th-placed Selston are just two points behind them and have a hefty four games in hand.

Holbeach United are ten points from safety at the bottom, so with two going down this season it is looking increasingly like two from the current bottom three will fall through the trapdoor.

Thorogood has labelled Pinchbeck’s final 12 games “cup finals” and says nobody at the club will bury their head in the sand as they bid to stay in a division they reached for the first time in their history back in 2018.

“We’ve got a third of our season left and we’re in a relegation battle,” said the Knights boss. “Nobody here is hiding away from that.

“There are 12 games left for us. Call them what you want; I think cup finals is what people usually say.

“Either way, it’s a mini-season for us and we need to start picking up points if we want to stay in the division – which we obviously do.

“Let’s be honest, this is the strongest the UCL’s top flight has been for a long time and there really aren’t any easy games for us.

“We’ve got players with the ability to play in this league and we’ve been playing some good stuff. But we’ve just not been clinical enough.

“That needs to change, starting with Gresley on Saturday.”

Indeed, the first game of Pinchbeck’s ‘mini-season’ couldn’t really be much tougher as they welcome third-placed Gresley to the Sir Halley Stewart Playing Field on Saturday (3pm).

The Knights lost the reverse fixture 3-0 back in August, with Thorogood admitting that they are likely to finish in the top two.

“I was calling this kind of game a free hit for us earlier in the season,” added Thorogood. “But the reality is that we can’t afford that kind of attitude now.

“Look, Gresley are one of the best teams in the league. If they don’t win it, I think they’ll finish in second place.

“What we need to be is as hard to beat as possible. I need the lads to go out there and put their bodies on the line for the club.

“It’s also important that, when we create chances, we take them.

“We’ve not been clinical enough as a team and that needs to improve.”

Thorogood is hoping to have on-loan striker Avi Viera available to take on Gresley. He played 90 minutes in the 2-1 loss to Eastwood on Saturday (see page 29) and is expected to stay on for a few more games before returning to parent club Wisbech Town.

The boss added that he’s not expecting to make too many more additions to his squad as they prepare to fight for their survival.