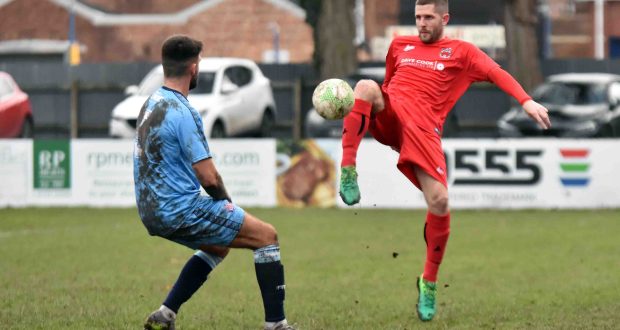 Spencer Weir-Daley marked his Pinchbeck United debut with a goal on Saturday – but it proved to be in vain as Heanor Town came from behind to win 2-1 at the Sir Halley Stewart Playing Field.

The relegation-threatened Knights produced an impressive first-half showing in the Uhlsport UCL Premier Division clash and Weir-Daley’s header was the very least they deserved at half-time.

However, key defender Neal Spafford went off with a hamstring injury that could keep him out for three weeks, setting the stage for a Heanor comeback.

Lewis Rourke (62) and James Sleigh (81) netted for them after the interval, leaving Thorogood’s side still two points from safety in 17th place after chief rivals Selston also lost.

“We probably could have had one or even two more goals in that first-half,” bemoaned the Pinchbeck boss. “Elliot Foster had two really good chances that on another day would have gone in.

“Losing Neal was a big blow obviously, but Heanor just went a little more direct and caused us problems in behind with the pace of their striker – who was very good, to be fair to him.

“Their winner had an element of fortune to it, but we have to take it on the chin.

“If I’m honest, I thought we deserved a draw. That point would have put more pressure on Selston and Newark, who both lost.

“We’re running out of games left to play, but we know what we’ve got to do.

“The big positive was Spencer scoring a great header on his debut.”