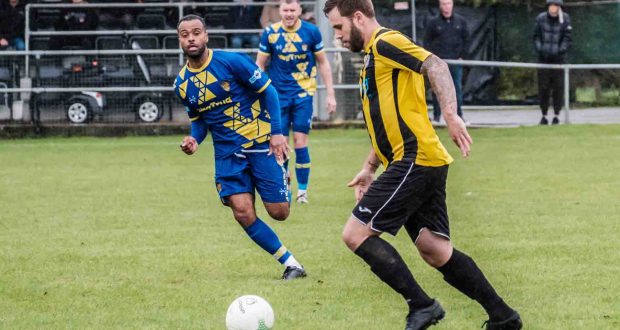 Pinchbeck United manager Lewis Thorogood has swooped for Spencer Weir-Daley and Elliot Foster in a bid to give his side more firepower in their relegation dogfight.

Montserrat international striker Weir-Daley, who lists Boston United and Spalding United amongst his former clubs, has joined the Knights from Melton Town.

Winger Foster has switched from Wisbech Town, but had a brief spell with South Holland neighbours Holbeach United earlier in the season.

Thorogood’s Knights go into Saturday’s home fixture with Heanor Town (3pm) in the relegation zone, some two points behind Selston, with seven games left to play.

The boss admits it’s a case of “must not lose” against 11th-placed Heanor, while a win could elevate them out of the drop zone providing Selston didn’t win against Loughborough Students on Wednesday (result not known as we went to press) or don’t beat Skegness Town on Saturday (3pm).

“I’m very happy to have signed Spencer,” said Thorogood. “I’ve worked with him twice before and certainly got a tune out of him when I was manager of Spalding.

“He’s very experienced and hopefully his goalscoring ability and the way he brings wide players into the game will benefit us.

“It’s a bit of a marriage of convenience for us both; he needs regular game time ahead of his international games with Montserrat and we need another striker for the run-in.

“I’m fairly confident we can get a tune out of Spencer, but just having his experience within the squad will be absolutely vital.

“We’re also pleased to get a deal for Elliot over the line. He’s very tricky and pacey and adds another string to our bow as regards going forward.

“It’s been a while since we last played, but the picture hasn’t really changed. Selston have lost a few of their games in hand, while Newark are stuttering again after a few good results.

“March has always been a month that looked big for us on paper. I’m only focused on Heanor this Saturday, which is a game I’m confident we can get something from.

“We’ve seen them play and we have a gameplan, but my main message to the lads will be ‘do not lose’ really.”

Pinchbeck could hand debuts to Weir-Daley and Foster, while Ben Robson and Ben Johnson are carrying knocks and will be assessed.