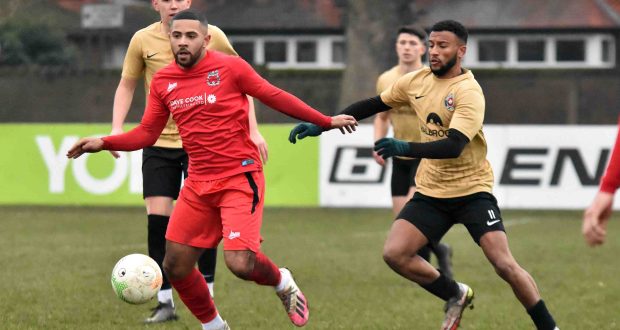 Lewis Thorogood felt that his Pinchbeck United side were like “rabbits in the headlights” as they ended their season with a 3-0 defeat at Leicester Nirvana on Saturday.

The Knights knew that a draw would have been enough to guarantee 16th place in the Uhlsport UCL Premier Division, but the defeat left them in the relegation zone in 17th.

A hat-trick from Deen Master did the damage, including one in the opening exchanges and two in the final ten minutes.

Despite finishing 17th, Knights chief Thorogood is confident that his side won’t be relegated but he was disappointed that they couldn’t finish the season with a victory.

“I think 3-0 was a little harsh on us,” said the Pinchbeck supremo. “But I don’t think we deserved anything from the game.

“To be honest, we looked a little like rabbits in the headlights – the size of the task in hand got to the players a bit.

“We looked nervous and that was reflected with their goal in the first minute. However, we soon settled and we had some good possession in the second half.

“We had what looked like a pretty good goal from Owen Sheriff ruled out by a late flag and Andre Williams had a few good chances.

“We huffed and we puffed, but once the second goal went in while we were chasing a goal the heads went down.

“It would have been nice to finish the season 16th, but we couldn’t quite finish the job after a great run of results.”