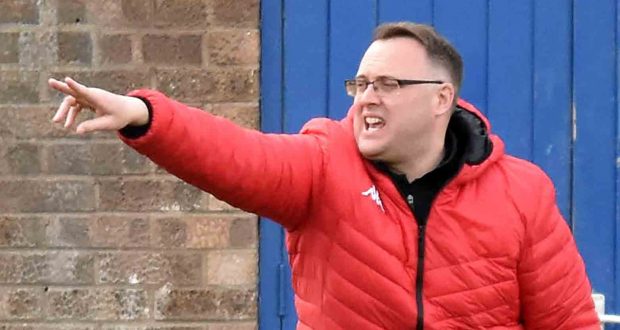 In what was a must-win game for the Knights, strikes from experienced duo Weir-Daley and Neal Spafford gave them a 2-0 half-time lead.

Pinchbeck rode their luck in the second half and were fortunate not to have keeper Alex Smith sent off when he came out of his goal and brought down Rio Molyneaux – escaping with just a yellow.

That proved pivotal for Lewis Thorogood’s side, who then clinched the win with Weir-Daley’s second in added time.

The victory completed a double for Pinchbeck over Newark which, added to the pair of wins they managed against Selston, means they’ve taken 12 points from their two big rivals this season.

Indeed, the three points ensured that the Knights are now in a strong position to avoid relegation.

For Thorogood, it was perhaps the most important win of his reign at the Sir Halley Stewart Playing Field.

He said: “What a game. I’m not sure we played as well as we can, but we could easily have scored six goals on the day.

“We had three one-on-ones that we wasted on the day, but also rode our luck with Alex avoiding a red card; if I’m the Newark manager, I’m expecting a red.

“We grafted as a team and rode a storm in the second half before getting that third goal at the end.

“It’s a really big win and one that we needed. I keep thinking back to the Quorn game (1-1) and thinking that the point we grabbed there was a really massive one.

“It has given us the confidence to keep fighting and the lads knew they had to win this one.

“We really stood tall in that second half and showed the qualities you need in our situation.”