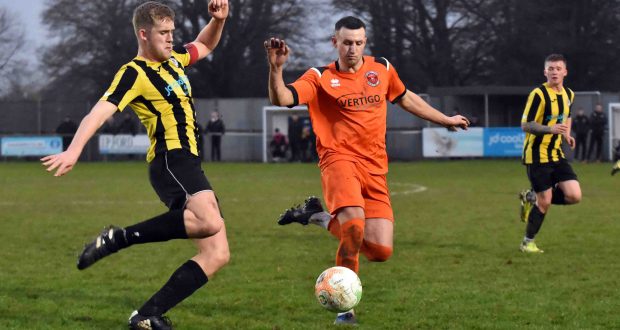 Pinchbeck United suffered a crushing 5-0 defeat at Skegness Town on December 28 as they finished the year just outside of the drop zone.

A hat-trick from former Spalding and Holbeach United striker Jonny Lockie did most of the damage in the Ulhsport UCL Premier Division North clash, while Adam Millson and Macauley Parker also netted.

It was Millson who opened the scoring at the Vertigo Stadium on six minutes, with Lockie netting on 40 and 44 minutes to make it 3-0 at the break.

The speedy striker completed his treble 15 minutes from time, before Parker rounded off the rout in added time.

Pinchbeck boss Lewis Thorogood admitted that his side were soundly beaten on the day.

“That’s not to take anything away from Skegness, they are a very good side – top six in this league, really.

“They deserved their win on the day, there’s no doubt about that.

“I’m afraid that you just can legislate for the errors that we made.

“It was always going to be a difficult away game on a tough pitch, but we simply made it too easy for them, sadly.

“It’s the kind of defeat that can zap the confidence out of a side, but we’re not going to let that happen.

“After the game I told them that I wanted them all in for training on the morning of New Year’s Eve.

“It was that bad from my point of view. We’ve been playing some good stuff recently, but this was very disappointing.”