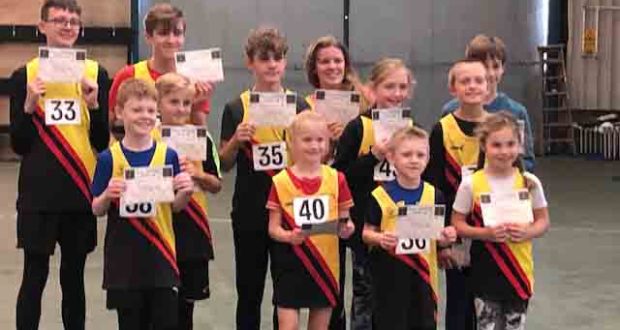 BACK IN BUSINESS: The youngsters were back on the track after a lengthy break.

The first of this season’s Junior Sportshall Athletics events was held at the B-Hive Indoor Athletics Training Centre on Saturday morning, with plenty of South Holland athletes in action.

After an enforced lapse in activity, the youngsters made a lively return to competition and produced some sparkling performances.

At under-15 boys’ level, Hayden Quantrill won all eight of his events.

Looking strong in track events, he recorded 31.6secs for three laps, clocked 75.3 secs in the six-lap race and managed a total of 78 bounds in the speed bounce.

In the under-13 boys’ age category, Jack Clark-Atkins made a good start to his sportshall season.

Elsewhere, under-13 Issy Reid produced performances that have clearly moved her up to a new level.

Also impressing was Devan Quantrill, who achieved four victories in the under-11 boys’ section.

He excelled in the running events, clocking 36.0secs for three laps, 54.1secs in the four laps and 85.3secs for six laps, then gained a score of 44 in the speed test.

In the same age group, Noah Donnelly Coles was second in high jump with a leap of over 96cm.

In the under-11 girls’ competition, Mia Clark Atkins also showed a higher degree of performance.

Flynn Donnelly Coles featured in the under-7 age group, winning the two-lap race in 26.4secs and the vertical jump with a leap of 28cm, as well as the standing triple jump with a best clearance of 3.38m and the balance test (12.1secs).