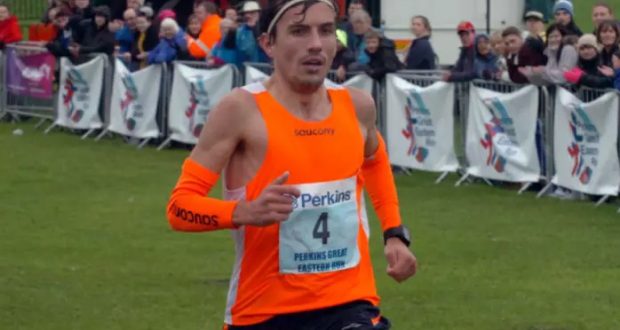 SIX UP! Nene Valley Harrier Aaron Scott roared to victory at the Folksworth 15.

Nene Valley Harrier Aaron Scott resembled Scott of The Antarctic when winning the Folksworth 15 for the sixth time.

Snow was falling and it was becoming icy underfoot by the 11am start time, and after some deliberation the organisers decided the race could go ahead.

Although conditions deteriorated it was a good decision, and provided the 500 entrants with a memorable day.

Scott, who was apprehensive at the start line, said: “I’m not going to race flat out, I don’t want to take any risks.” And he was true to his words for all of three miles, running alongside eventual runner-up Dave Hudson of BRJ Running Club.

Having assessed the conditions the highly rated Stamfordian then put his foot down, and was nearly two minutes clear by the halfway stage.

The fun was only just beginning for Scott and the other competitors as the gently falling snow turned into a raging blizzard, making the second seven and a half mile lap a real battle of endurance.

The eventual winning margin for Scott was close to four minutes and he crossed the line in a time of 1.21.38hrs, over three minutes down on his 2014 course record of 1.18.18hrs.

Despite running the whole 15 miles in a waterproof jacket, Scott took a while to defrost, after.

He said: “It wasn’t quite as bad as I’d feared, but the second lap wasn’t much fun.

“Luckily the snow was blowing across the course on the final few miles, so I was able to get a move on.”

The Stilton based athlete, now running for Bushfield Joggers, had taken a break from competitive racing, and her return could not have gone any better, as she made light of her pre race aim of a top ten finish by leading from gun to tape.

“I set myself a target of going round at 6.45/mile pace,” said McCartney “I did this as a way of keeping focus and to avoid thinking about the hills and the bad weather.

“The first lap was very comfortable, I cruised through the hills and the miles hitting 6.30mins and one 6.12mins coming down the hill.

“At that point the snow was coming down and we were being warned of ice by the heroic marshals standing in the freezing temperatures.

“For me, Folksworth 15 is a race of six hills. I run the race counting down the hills.

“As it turned out the six hills weren’t the toughest part of the race unlike previous years.

“The real test was the pelting snow along Bullock Road with a strong wind, the snow was painful on my face, but there was no escape from it, apart from closing a single eye for a couple of miles to protect myself.

“Added to that there was the laying snow, which took away the chance to speed through the last lap as there was so much less traction in my road shoes

“On the last stretch I pushed my way through, and seeing the finish line was fantastic.

“I spent the next three hours thawing out with the rest of the amazing runners who made the experience so worthwhile.”

Peterborough AC’s Maggie Skinner was runner-up with a time of 1.40.31hrs.

It was a good day all round for Bushfield Joggers, as their runners took several of the major prizes.

Winstone, who has been running for most of his adult life considered it to be the worst conditions that he has ever raced in.