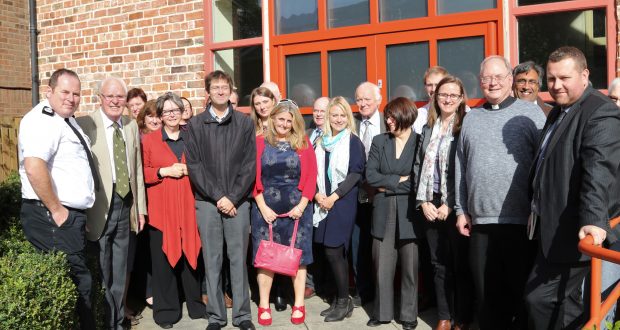 The “Implications of Brexit on the Lincolnshire Economy” speakers and organisers.

The implications of Brexit on economy discussed at Long Sutton forum

A group dedicated to social cohesion has drawn upon leaders in business, politics and religion for its first meeting discussing the implications of the EU referendum.

Subjects covered include the implications for local farming, and the current government position outlined.

Fr Jonathan said the day went extremely well and it will be followed by the next meeting in March, which will feature former Archbishop of Canterbury, Rev Dr Rowan Williams. “He’s going to listen to what’s been said and then take a step back and comment on what was being said in relation to human dignity,” said Fr Jonathan.

After the first meeting, Fr Jonathan concludes that in the face of the implications, “what was apparent was the need to look at these issues in a holistic way and to work together on them.”

Fr Jonathan said the meeting garnered government attention – a representative from the cabinet office attended to listen to what had been said and to relay the views back to the Prime Minister and to keep the channel of communication open in the future.

A number of focus groups will also be formed between now and the next meeting in March, said Fr Jonathan.

Fr Jonathan said the forum came out of his social work that he has developed over the past six years. Through various groups, Fr Jonathan addresses issues such as poverty, isolation and addiction.