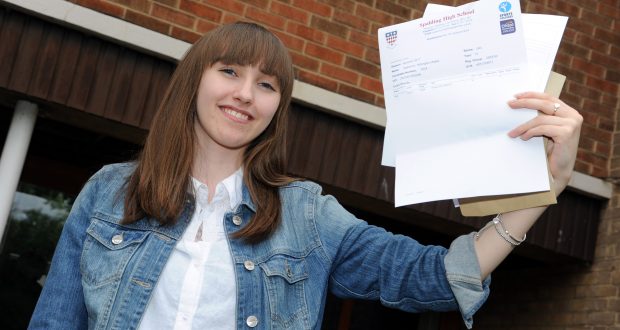 Controversial new reforms to A levels seemed to have little impact on results in South Holland. Both Spalding Grammar School and Spalding High School students achieved good outcomes, according to headteachers.

There were smiles and tears alike at Spalding schools as the big day arrived last Thursday.
Two years of hard work and study culminated in that breathless and emotional moment when exam results were revealed.
Steve Wilkinson, Spalding Grammar School headteacher, said results had improved from 2016.
“Our A* to B percentage is up to 57 per cent from last year’s 48.5 per cent. Biology, PE and English Literature students have performed on the value added figures in line with students at the top 20 per cent of schools nationally.”
He was impressed with the work done in all departments and, of course, the students. Mr Wilkinson said there had been an increased focus on the VIth Form with head of department, Mr Love, intervening with any students who were in difficulty.
In Year 13 a total of 128 students took A Levels this year. 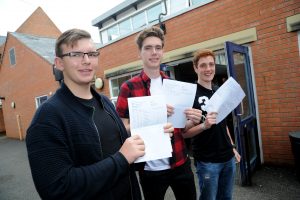 Year 12s Jakub Kosyl, Jack Yewman and Sam Nickels were happy with their AS Level passes.

Mr Wilkinson reckoned about 85 per cent would take up places at universities.
“All four of our students who had offers from Oxbridge colleges have been successful, our best since 2010.”
At Spalding High School headmistress Michele Anderson said: “We continue to maintain our 100 per cent pass rate at A level, something of which we are incredibly proud.
“The examination landscape continues to be particularly erratic and current sixth form students have had to deal with newly reformed linear A levels alongside shifting grade boundaries.
“They have coped with these varied challenges with maturity and positivity and are to be commended for their resilience.
“Staff are to be highly commended too for dealing with the demands of the new specifications, mark schemes and assessment regimes and for ensuring that our students are both well taught and exam ready.
“Our A level students achieved 58 per cent A* to B which is in line with expectations for the year group. We are very proud of all our students and their achievements.”
Rebecca Wright gained five A* grades, while Tegan Archer, Katie Embling and Katie Ridlington achieved three A*s.
Three students will take up Oxford/Cambridge places.
Boston College recorded a 100 per cent pass rate in all 12 subjects, with 45 per cent gaining A* to B grades.
Among those celebrating was Spalding student Aiden Reeve, who was thrilled with his A* in Sociology, A in Psychology and B in English Literature.
After a gap year he hopes to study Psychology with Criminology at City University, London. He aims to join the Metropolitan Police.
“I didn’t expect these results. I’m really happy!” he said.