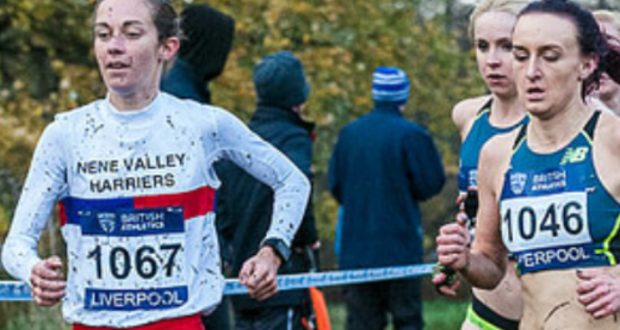 Nene Valley Harriers ace Charlotte Taylor got bogged down in the Liverpool mud at the British Athletics Cross Challenge.

Spalding native Taylor had travelled home from her San Francisco University base to be involved in the event, which also served as the European Cross Country Championship trials.

The 23-year-old has been going from strength-to-strength since relocating to the USA, but suffered a rare setback, finishing 17th in a race that she was amongst the favourites for.

The World Championship 10,000m finalist made a good start, and was up with the leaders early on.

However, the American cross country courses that Taylor is used to running on are generally firmer underfoot than the Sefton Park mud bath, and the quality of the field was such that any weakness would be punished.

Aldershot and Farnham ace Emilia Gorecka won the race covering the 8.1km course in a time of 27.59mins.

Taylor, who had the beating of Gorecka on the track during the summer finished a minute further back, and is now unlikely to be selected for the GB team for a Championship which she played a starring role in last winter, when finishing fourth in the under-23 race, and winning team gold.

Taylor has never been one to sugar coat her disappointments – and she summed up her race frankly.

She said: “Sadly I’m not very happy with how my race went yesterday. I really struggled with the muddy conditions and I don’t think the result reflects where my fitness is at right now.

“I came back to race the trials to give myself a chance at making the team for the European Cross Country Championship, so I’m a little disappointed I was so far off achieving that yesterday, but I’m still glad I gave it a try.”

The Liverpool setback came just seven days after one of the races of Taylor’s life when she finished third in the National Collegiate Athletic Association Cross Country Championship in Louisville Kentucky, leading her university to second place in the process.

Nene Valley had three other athletes in action. Latvian steeplechase International Edgars Sumskis impressed with a 73rd-place finish out of over 500 athletes in the senior men’s race. He clocked 33.13mins on the 10km course.

Bradley Allan also finished 120th in the men’s under-20 race and Megan Ellison ran in the under-20 girls race, also finishing 120th.

Ruth Jones was also the 11th lady home in a high-class field with a 32.53mins clocking, while Barry Warne ran 33.49mins to take the silver medal in over-55 age group of The Eastern Masters

Championship, which was incorporated in the race.