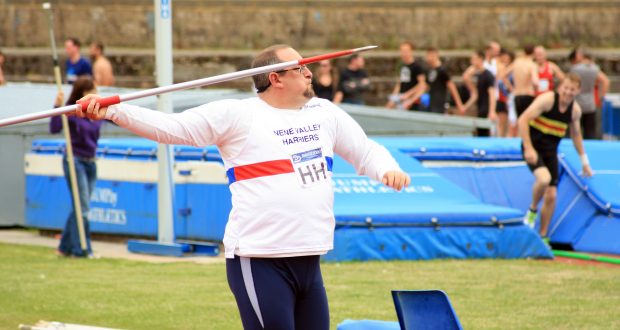 Having finished 2017 as number one in the country for his age in both the 60m and 80m hurdles, Freddie Fraser opened his 2018 campaign with 60m hurdles gold at the South of England under-15 and under-17 Championship.

The young Nene Valley Harrier set a club record with a blistering time of 8.74secs in the final.

William Kong also set a club record of 7.45secs to take bronze in the under-15 60m. The Harrier is ranked number one in the UK indoors for 300m, and has recently broken club records over 60m and 300m.

Both athletes will go into this weekend’s Southern Indoor Championships with great chances of medal success.

Meanwhile, Josie Downer reached the final of the long jump in which she finished eighth.

David Bush took first place in the senior men’s category with a PB total of 1,923 points.

In the over-35 section, Sean Reidy was also a winner with a solid total of 1,553 points.

Ace thrower Simon Achurch was victorious in the over-40 men’s section, bagging a score of 2,826 points.

The other Nene Valley winner was Hazel Gering in the over-45 women’s section after bagging 1,416 points.

Meanwhile, Tim Needham (third) and John Blackwell (fourth) placed well in the over-65 men’s group with scores of 2,480 points and 2,129 points respectively.

The regular winner roared to a winning time of 32.15mins to beat Chris Darling (Cambridge and Coleridge) by almost a minute.

Steve Robinson, who runs for Peterborough AC, came in third with a 33.26mins.