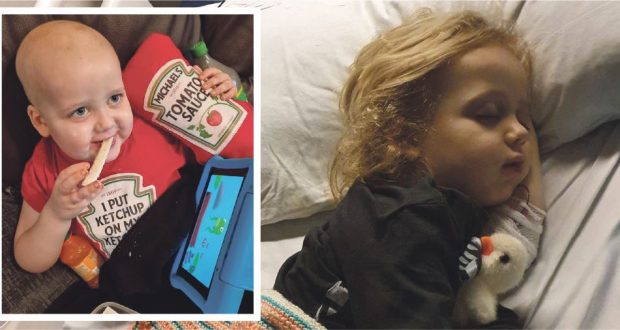 Michael Lidgey-Hutt is pictured after being admitted to hospital and (inset) the Tomato Ketchup loving three-year-old after starting his chemotherapy for leukaemia.

A Gedney Hill family have been touched by the support from the community after their three-year-old ‘glorious leader’ was diagnosed with leukaemia.

Mum and dad Lisa Bell and James Lidgey-Hutt have been left devastated after son Michael was diagnosed with the cancer last month.

In response and with only one partner allowed into hospital due to COVID-19 restrictions, dad James, who is also involved in Viking reenactments and part of the Wulfhar clan from Peterborough, has set up the Viking Log – Michael’s Leukaemia Battle Facebook page to keep people updated of the progress of who they’ve nicknamed ‘our glorious leader’.

Michael had been unwell and diagnosed as anaemic just before Christmas, but by mid-January was suffering with extreme fatigue.

It was initially diagnosed as a relapse, but he was rushed to hospital two weeks later unable to take in liquids.

There Lisa and James were told their son had either cancer or sepsis before blood tests revealed it was acute lymphoblastic leukaemia.

“We were just mostly in shock and still are,” said Lisa who works as a customer support operative. “Michael is a typically very active boy who loves anything that’s going to get him dirty and keeps us on our toes.

“I said to my mum the Saturday before he was diagnosed that there was something more going on that just being anaemia but I would have never have thought cancer.”

James, who works in security, added: “We were left stunned and we are still a little shell-shocked.

“Michael is normally a happy-go-lucky trouble maker and we call him ‘our little dictator’ as he spends all his time bossing us all about.”

Because of the COVID restrictions, only one of the pair are able to be with Michael at one time and they can only change over every five days on completion of a negative test.

That’s why James set up the Facebook page alongside the support they’ve received.

“Our reaction to the support we have received is honestly stunned amazement,” he said. “People have been so kind and generous and the love for ‘glorious leader’ has been unprecedented.”

“The fundraising Paula Somers at Giggles Galore is doing is absolutely amazing,” added Lisa. “We cannot thank her enough for it and her support and everyone else’s.”

The Michael the Warrior JustGiving page set up by Paula says: “Together we have experienced many exciting adventures over the past couple of years, with Michael having a larger than life personality and keeping us all on our toes.

“He is a mud loving, cheeky smiling, confident little boy, our very own wild child. Our Giggles family miss him terribly and we cannot wait for our little warrior’s return.”

You can also donate via Jeoffrey’s Go Fund Me Page ‘Waxing My Legs To Raise Money for Michael’s Family’.