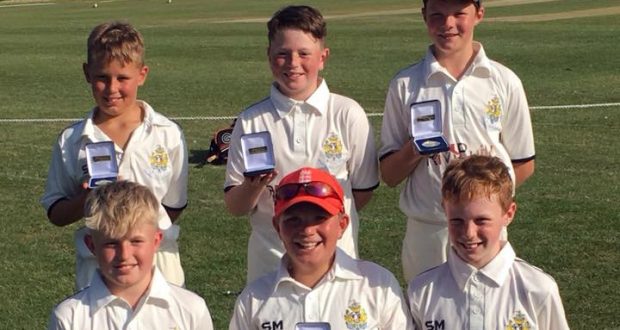 JUST CHAMPION! Spalding Town won the first-ever under-11 competition at the Memorial Field.

Ten teams took part in Spalding Town Cricket Club’s first-ever under-11 six-a-side tournament at the Memorial Field last weekend – and there was
a home winner.

The under-11 group is the first opportunity for children to play competitive cricket with a hard ball and protective equipment and is very different from the soft-ball they play in the ages below.

Sides from Spalding, Bourne, Peterborough, Long Sutton, Moulton Harrox, Market Deeping and Burghley Park all took part in the first tournament of its kind in the area for this age group, which was played over two pitches throughout the day.

The league structure culminated in semi-finals between Spalding A and Bourne and Peterborough A and Market Deeping.

What followed was two thrilling matches, with the final ending up as an all-Lincolnshire affair between Spalding A and Market Deeping.

Spalding A batted first and made a competitive total before managing to restrict Deeping, who in the end fell just short.

In all of the matches played on the day, more than 1,600 runs were scored and over 75 wickets taken, with experience and fun had by all players and coaches.

Highlights on the day included Spalding’s Oliver Wright taking a hat-trick and James Laud scoring a 50 not out, a batting feat that was matched by Market Deeping’s Alex Green.

Due to the overwhelming success of the competition, this now looks set to be an annual event in the Spalding Town calendar each year.