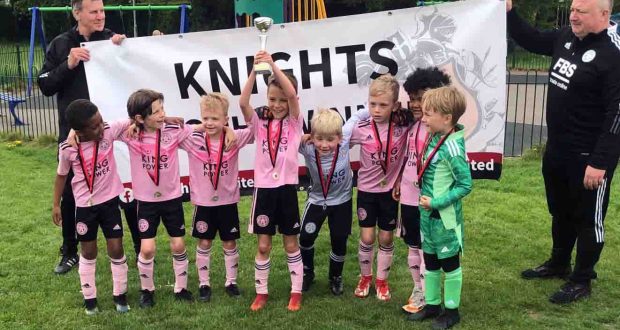 GET IN: One of the age group winners at Pinchbeck United's 'Knights Trophy' competition over the weekend.

Lewis Thorogood feels that Pinchbeck United have put themselves on the footballing map after hosting a hugely successful junior tournament over the weekend.

The Knights Trophy, which was played at the club’s Glebe Field facility on Knight Street, attracted a combination of professional, academy and local teams and saw plenty of football played on Saturday and Sunday.

The likes of Leicester City, Aston Villa, Doncaster Rovers and York City all sent teams to South Holland, with local sides from Spalding United, Stamford and Peterborough Sports testing themselves against them.

Thorogood, who is Pinchbeck’s first team manager, has vast experience of arranging this kind of tournament – having done so in previous roles with both Boston United and Spalding United.

And, while the tournament – which was contested by age groups from under-7s up to under-12s – helped raise the profile of the club, it also generated vital funds for them.

“The competition went very, very well,” enthused Thorogood. “The weather was great and there was some brilliant football too.

“I think a few of the parents of the players from the bigger clubs wondered what they were doing at a little village in Lincolnshire.

“But, by the end, we had the same people saying ‘see you next year’ and we’ve since had emails asking to be kept informed on next year. It was great to see a few of the local sides playing against acadamies and teams from the professional game.

“From our point of view, it’s really positive PR for the club. It’s been a tough season for the first team, but this is a success story for us and will really put us on the footballing map.”